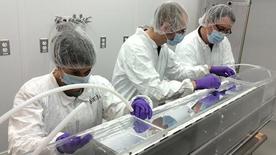 A new study from the international Daya Bay neutrino experiment in China may have found an answer for why there appear to be fewer neutrinos from nuclear reactors than predicted in theoretical models. The next step will be for Yale’s Wright Lab — which has been involved in the Daya Bay research for a number of years — to confirm whether that answer is correct.

Neutrinos are thought to be fundamental particles in the universe. They do not carry an electrical charge and move through the universe almost entirely unaffected by natural forces. For years, scientists have devised elaborate experiments to detect the subatomic particles and better understand their behavior. Yale scientists were involved in the experiments that led to the discovery of neutrino oscillation.

Yet since 2011, physicists have been faced with an anomaly: Experiments at nuclear reactors showed fewer antineutrinos (the antiparticles of neutrinos) being produced than models had predicted. One theory to explain the discrepancy was that neutrinos were morphing into an undetectable form known as “sterile” neutrinos.

The new Daya Bay study proposes a simpler explanation: a miscalculation in the predicted rate of antineutrino production for one particular component of reactor fuel.

The Daya Bay scientists found that antineutrinos produced by nuclear reactions from the fission of uranium-235 were inconsistent with predictions. Uranium-235 is an isotope that is common in nuclear fuel.

“Most of the existing world data view neutrinos emitted by commercial power plants using low enrichment nuclear fuels,” said Yale physicist Karsten Heeger, a member of the Daya Bay team and director of Yale’s Wright Lab. “The fissions within these reactors are almost entirely from a mixture of isotopes: U235, U238, Pu239, and Pu241. Daya Bay measures a relative deficit in the number of neutrinos produced from U235.”

Yale’s Wright Lab will play a key role in determining whether the theory about uranium-235 is correct.

Wright Lab is the lead institution in the Precision Oscillation and Spectrum Experiment (PROSPECT), an experiment under construction at the High Flux Isotope Reactor (HFIR), at the Oak Ridge National Laboratory in Tennessee. HFIR operates mainly with uranium-235 fuel.

“Since almost all of the neutrinos at HFIR originate from uranium-235, PROSPECT will be in a unique position to verify the Daya Bay observed deficit and will be able to make precise measurements of the neutrino energy spectrum to help identify where current models disagree with data,” Heeger said.

“In addition, PROSPECT will search for oscillations in the neutrino flux to test and rule out the possibility of new particles, such as the sterile neutrino, contributing to the remaining discrepancy between experiment and theory,” Heeger added.

The antineutrino detector for PROSPECT is currently under construction at the Yale Wright Lab and is expected to be installed at HFIR later this year. Funding for PROSPECT is provided by the U.S. Department of Energy’s Office of Science and the Heising-Simons Foundation.

Other members of the Yale group involved in the new Daya Bay measurements include Henry Band, Tom Langofrd, and Tom Wise.