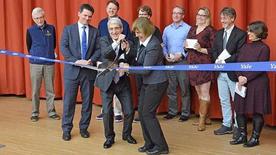 The Yale Science Building has officially emerged from its crane-topped chrysalis, ready and primed for scientists eager to wrestle with the key questions facing life on Earth in the 21st century.

After two years of construction, the $283 million project formally opened Oct. 29, as university officials, researchers and students convened in the building’s O.C. Marsh Lecture Hall for a ribbon-cutting ceremony. The building has been hailed as the boldest development yet in Yale’s ambitious effort to further scientific research addressing some of the world’s most pressing problems.

Since 2013, Yale has invested half a billion dollars in new buildings and renovations on Science Hill — including major renovations to Sterling Chemistry Lab, the creation of specialized physics laboratories at Wright Lab, and investments in core research facilities.

The Yale Science Building (YSB) brims with seven stories of cutting-edge tech, from the wet-bench labs of the Quantitative Biology Institute to the greenhouse built directly onto the roof with glass shipped in from overseas.

This building is completely unique among modern science buildings because of the breadth of scientific endeavor that it’s designed to accommodate.

“This building is completely unique among modern science buildings because of the breadth of scientific endeavor that it’s designed to accommodate,” said Anna Marie Pyle, Sterling Professor of Molecular, Cellular, and Developmental Biology, and chair of the YSB building committee.

“Here in YSB, we can visualize the atomic details of cellular molecules in the cryo-electron microscopy facility; we can watch living cells move and change in real time in our life microscopy core; we can grow lemon trees on the roof and cure diseases that plague the American citrus industry,” Pyle said. “We can study how insects and fish sense the world around them through vision and smell in our insectary and aquatics cores; we can develop mathematical algorithms to model the growth of human pathogens and cancer in our quantitative biology center; we can synthesize new molecules as drugs and tools in the chemical synthesis core. But most importantly, when the future inevitably comes, the labs inside YSB can be completely dismantled and transformed to do new kinds of science that we don’t even envision today.”

President Peter Salovey likened the YSB launch to trailblazing scientific efforts from previous generations at Yale — from the discovery of vitamin A to the creation of drugs that fight cancer.

“In 100 years, when people look back to this moment, they will see that this was when we put a stake in the ground for our aspirations in research and education,” Salovey said. “They will see that this building played a vital role in fulfilling our shared vision to accelerate the pace of scientific discovery at Yale to benefit the lives of people around the world.” (Read the President’s address.) 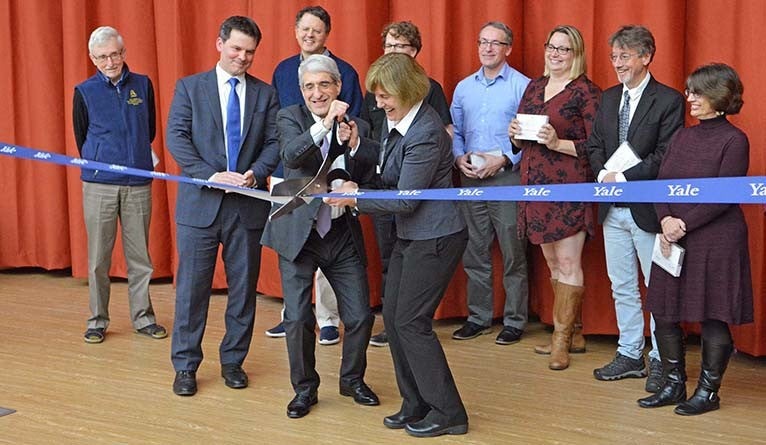 The new building has a crucial role as a central hub for interdisciplinary collaboration on Science Hill. YSB is designed to bring natural light into lab spaces; its common areas and office layout bring researchers together as they walk through the building; even the adjacent new pavilion — complete with a café that serves raspberry galettes and carrot-ginger smoothies — and courtyard area are intended to draw people in for conversation and interaction.

University officials said YSB also has an energy-use target that is 50% lower than the average for a Yale laboratory. Its sustainability-minded features include chilled beam technology, a tightly regulated ventilation system, comfort zones where climate controls are adjusted when the spaces are not occupied, and a higher level of automation that will be monitored for performance.

Jeffrey Brock, dean of the School of Engineering and Applied Science and dean of science in the Faculty of Arts and Sciences, said the opening of YSB represents a “fundamental change in the center of gravity” on campus. Brock served as master of ceremonies for the Oct. 29 event, which also honored more than a dozen faculty and staff members who helped in various stages of YSB development.

New Haven Mayor Toni Harp also was on hand to celebrate the YSB launch. She said the building reflects Yale’s confidence and investment in New Haven, and the many roles Yale has played in the city for centuries.

“Now we have this brand-new, inspiring tribute to what is ahead of us,” Harp said.

The scientists whose labs are up-and-running in YSB said they are feeling inspired, too.

“We have a whole community we’re getting to know,” said Valerie Horsley, associate professor of molecular, cellular, and developmental biology. “I’ve had more interactions with colleagues in the last month than I had in the previous six months.”