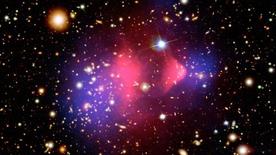 When considering what makes up the universe, it’s surprising that scientists could focus on just one yes/no question. But that’s exactly what a group of researchers supported by the Heising-Simons Foundation is doing.

Scientists across the United States are working together to determine if axions — hypothetical subatomic particles — are the leading candidate for what makes up dark matter. Although this is a big question about the universe, Heising-Simons Foundation Science Program director Cyndi Atherton said that researchers may be able to answer it in just a few years’ time.

“It’s a small range of particle masses to investigate, relatively speaking. So we’ll look for axion dark matter in that small range, and we’ll see it — or not,” Atherton said. “Either way, we will know more about the universe.”

If the axion does not exist, researchers will consider what other types of theoretical particles could make up our universe. But if it does, Atherton said, “It will basically rewrite physics.”

These grants are the first investments that the Heising-Simons Foundation has made in searching for axion dark matter, and Atherton anticipates future collaborations to include more research and scientific symposia.

The project funded at Yale University,”Axion Dark Matter eXperiment at High Frequency (ADMX-HF),” will overcome technical barriers that until now have presented major obstacles which have hindered the experimental detection of axion dark matter.

Presently, the state-of-the-art devices used to detect axions are based on the conversion of these hypothetical subatomic particles to a weak radio signal within a microwave cavity that is permeated with strong magnetic field. However, existing instruments are sensitive only over a limited range of predicted axion masses which correspond to frequencies between about 0.1 and 100 GHz, with 5 to 20 GHz being favored in some models.

With the support of the Heising-Simons Foundation, Steve Lamoreaux, professor of physics, hopes to break new ground in the field by integrating cutting edge technologies, including quantum amplifiers and superconducting cavities, which will enable their team to conduct the first-ever highly sensitive search in the 4-12 GHz frequency range, complementing the efforts of other groups presently searching in the 1 GHz range and below. Collaborating institutions in this work include UC Berkeley, the University of Colorado, and the Lawrence Livermore National Laboratory.

Lamoreaux states, “More than twenty years ago, when the idea that axions could solve the dark matter problem was first put forward, the technology required to detect them did not exist.  New technologies in superconducting quantum and squeezed state amplification will allow us to attain a theoretically interesting level of sensitivity in the higher mass and hence higher frequency ranges that are theoretically favored. Of course nobody knows what the axion mass is, and in order to perform a complete search, different technologies will be required in different mass ranges. Support from the Heising-Simons Foundation is already helping to harmonize efforts between multiple collaborative groups focusing on different mass ranges. In this way, the entire range can be searched more rapidly, and hopefully the time to discovery will be years instead of decades.”

Yale Wright Laboratory is advancing the frontiers of fundamental physics through a broad research program in nuclear, particle, and astrophysics including the search for dark matter, studies of neutrinos, and relativistic heavy ion physics. Following extensive renovations, Yale Wright Laboratory will provide state-of-the-art facilities, technology support, and interaction spaces for training the next-generation of scientists and developing cutting-edge experiments. ADMX-HF hosted at Wright Lab is part of a larger coordinating effort at Yale in weak interaction physics and will provide a new window to the dark particle Universe.

Mark Heising and Elizabeth Simons established the Heising-Simons Foundation in 2007 to advance sustainable solutions for the environment, enhance the education of young learners, and support groundbreaking research in science. Learn more at heisingsimons.org.