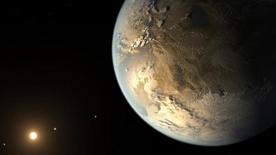 NASA is enlisting teams of scientists around the nation, including a group from Yale, to collaborate on a new approach for finding life on planets outside our solar system.

The joint effort is called Nexus for Exoplanet System Science (NExSS), and it will create a “virtual institute” of scientists from 10 universities, three NASA centers, and two research institutes. NASA selected teams based on proposals from across NASA’s Science Mission Directorate.

Yale astronomy professor Debra Fischer will lead a team that is building new spectrometers with the stability and precision to detect Earth-like planets orbiting nearby stars. A critical part of the team’s work involves new statistical techniques to distinguish “noise” — velocities in the photospheres of the stars — from the reflex velocities induced by planets.

Fischer’s team also will continue to enlist amateur astronomers to search NASA’s Kepler public archive data for exoplanets, which are planets orbiting around other stars. Fischer has been at the forefront of citizen science efforts to search for exoplanets via the Planet Hunters program. Citizen scientists have found more than 100 transiting exoplanets not previously detected. Many of these planets orbit in the habitable zones of their host stars.

“NExSS is building collaboration and open-sourcing of ideas in ways that have been tried and true in competitive businesses,” Fischer said. “This signals a new era where we spend more time problem-solving and team-building than competing and excluding our colleagues. We have heard from all of the founding partners about their research, and we’ve brainstormed about how our related skills and expertise might enrich their science. It’s a win-win for science and humanity.”

Since the launch of NASA’s Kepler space telescope six years ago, more than 1,800 exoplanets have been confirmed. There are thousands more exoplanet candidates waiting for confirmation.

In order to determine the habitability of these planets and look for signs of life on them, NExSS will coordinate scientific research into the various components of exoplanets. It’s a “system science” approach to understanding how biology interacts with the atmosphere, geology, oceans, and interior of a planet, and how the host star affects these interactions.

NExSS will draw from the scientific expertise in each division of NASA’s Science Mission Directorate. Earth scientists will develop a systems science approach by studying our home planet; planetary scientists will look at other planets in our solar system; heliophysicists will study how the Sun interacts with orbiting planets; and astrophysicists will provide data on exoplanets and host stars.

“This interdisciplinary endeavor connects top research teams and provides a synthesized approach in the search for planets with the greatest potential for signs of life,” said Jim Green, NASA’s director of planetary science. “The hunt for exoplanets is not only a priority for astronomers, it’s of keen interest to planetary and climate scientists as well.”

NExSS will be led by scientists from the NASA Ames Research Center, the NASA Exoplanet Science Institute at the California Institute of Technology, and the NASA Goddard Institute for Space Studies.