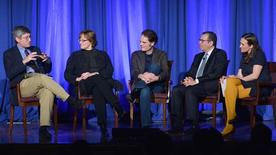 As thousands of scientists around the world prepared for the April 22 March for Science, a trio of top Yale professors shared their views in a Poynter Fellowship symposium on truth, trust, and science in the modern age.

Carl Zimmer, science writer and author of The New York Times column “Matter,” and Alison Snyder, science editor of Axios, moderated the discussion, “Truth in the Internet Age: Science Under Siege.” The event was held April 20 at Sheffield-Sterling-Strathcona Hall.

“We have a polluted scientific communication environment,” said panelist Dan Kahan, the Elizabeth K. Dollard Professor of Law and professor of psychology, during his portion of the discussion.

Instead, he offered, “find some basis for using what science knows that is completely independent from denying your group identity.”

Meg Urry, the Israel Munson Professor of Physics and Astronomy, said scientists and journalists must do a better job of communicating “the living, breathing thing that science is,” and tell the stories of how basic science has powered our economy and our technology for generations.

David Hafler, the William S. and Lois Stiles Edgerly Professor of Neurology and professor of immunobiology, and chair of the Department of Neurology, said one of his jobs as a physician is to be an educator.

Part of that education, Hafler said, is to explain more effectively that science is about models that are refined and improved. Science, he said, is about probability rather than certainty.

“We’re doing things now (in medicine) that were unimaginable six months ago,” Hafler said. “That’s the narrative we need to tell.”

The panelists warned there is a risk that scientists being more vocal about issues may inadvertently widen political divisions in the country, but noted there are opportunities for positive change, as well.

“If it remains a conversation about what science is and what it does for the world, and stays away from political finger-pointing, it could be an educational moment,” Urry said.