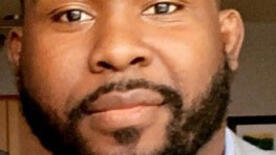 Wright Lab alum Dr. Charles D. Brown II is an experimental quantum physicist at the University of California, Berkeley, a passionate science communicator, and a champion for Black Americans in STEM.  Of particular note, he is a co-founder of #BlackinPhysics week, which will be held for the first time this October.  He graduated from Yale Physics in 2019; his thesis was on the “Optical, Mechanical and Thermal Properties of Superfluid Liquid Helium Drops Magnetically-Levitated in Vacuum” (advisor Jack Harris).  We asked Dr. Brown a few questions about his research, outreach, and advocacy; see below for the interview.

What kind of research did you do at Wright Lab?

We used powerful magnetic fields to levitate drops of superfluid helium in vacuum, which allows the drops to efficiently cool themselves via evaporation to temperatures near absolute zero. Superfluid helium is a special material that has no internal friction (viscosity), and essentially does not absorb infrared or visible light. Because of the superfluid’s unique properties, it could become possible to use these levitated drops to study the quantum physics of the drops’ vibrations; this would be interesting because it would demonstrate quantum effects in the motion of an object that is much more massive then the systems in which these effects have been previously observed. Experiments with levitated helium drops may also be useful for addressing outstanding problems in classical and quantum fluid dynamics (e.g., the equilibrium shape of a rotating liquid drop, or quantum turbulence in an isolated liquid).”

What kind of research are you doing now?

I am a postdoctoral researcher in the Ultracold Atomic Physics Group at the University of California, Berkeley.  We study the physics of atoms that obey Bose-Einstein statistics, which are trapped in a lattice made of light – an optical lattice. The optical lattice is an optical triangular superlattice, which is formed by overlapping two separate optical triangular lattices made from laser beams with wavelengths 532 nm and 1,064 nm. At our discretion, the optical superlattice can take on a variety of geometries: triangular, honeycomb or kagome. The kagome lattice is of particular interest to us because it manifests frustration, which is the phenomenon of having many degenerate ground states due to the atoms’ configuration. Frustration often leads to exotic states of matter. For example, the spin-1/2 antiferromagnetic Heisenberg model in a kagome lattice is a frustrated quantum system whose ground state is believed to be a quantum spin liquid. Further, because the band structure of the kagome lattice has a flat excited band, the lattice manifests frustration in its band structure. In a flat band, the atoms experience a large kinetic energy degeneracy and zero group velocity; in this case, atom-atom interactions are strongly accentuated, leading to the possibility of forming interesting interaction-driven states of matter, such as a trion-superfluid, supersolid, or other exotic states.

As a scientist, can you describe what you do on a usual day to conduct your research?

A large part of my day-to-day hands-on experimental work involves aligning lasers and optics (mirrors, lenses, etc) in the morning. This allows me to control and stabilize the frequency and position of the many different lasers we use to cool and trap rubidium (Rb) for our experiments, which is important for generating a Rb Bose-Einstein condensate and loading it into an optical lattice. The science begins once we can load a BEC into a lattice. Recently, we conducted experiments that involved creating a BEC, accelerating it, then trapping it in the kagome lattice, all before shutting off the lattice and imaging the atoms. This process allowed us to place the atoms into a particular excited Bloch state (which corresponds to a particular grouping of energy states) of the kagome lattice – the should-be flat energy band. We found that interactions between atoms effectively change the geometry of the optical lattice, such that the energy band that should have been flat started to develop some curvature. To learn all of this, we analyze images of the atoms after they spent time in the lattice, so data analysis is an important part of my typical day.

My day-to-day work outside of the BEC lab involves designing and building new experimental apparatuses (optics tables, vacuum systems, electronic circuits, etc.); using python or Mathematica to simulate experiments with BECs, or to simulate the effect of an experimental tool (such as a magnetic conveyor belt for atom clouds); working with and mentoring students; reading science journals to stay informed about the current state of the art (last in this list, but certainly not least important).

How did your time at Wright Lab prepare you for what you are doing now?

My time at Wright Lab, and specifically with Professor Jack Harris over the years, prepared me for my current work in several important ways. First, I learned how to thoughtfully design and build sophisticated experiments that grant access to studying intriguing physics. Second, Prof. Harris is a theoretically inclined experimentalist who always placed an emphasis on attaining understanding of the relevant physics through derivations and simulations, often before we even reached the point of experiment. Having developed these analytical and simulation skills has been invaluable during my time as a postdoc and will continue to be throughout my entire scientific career. Third, I learned about the importance of working with a team, and how to facilitate the growth of a cohesive team of researchers who can build off each other’s strengths to make forward progress in the lab.

What inspires and/or excites you about your research?

Since I took my first course on quantum mechanics back in 2010, I have been deeply fascinated by its tenets. Now, I am a professional experimental quantum physicist who can study quantum physics in clean and cold environments where the quantum nature of the system is crucial for understanding its physics. My fascination has only increased in recent years, so I am excited to continue down this path, and I am inspired by prospects of more deeply understanding parts of the quantum nature of the universe.

In my postdoctoral research, we have a path toward studying the many-body quantum physics of interacting particles (i.e., bosons or fermions), which could lead to the observance of several exotic states of matter that we wouldn’t come across in our everyday lives. I find this to be incredibly exciting.

Are you involved in any outreach, and if so, what, and why is it important to do outreach as a professional scientist?

I recently wrote a commentary “Disentangling anti-Blackness from physics” that appeared in Physics Today, which illuminated many equity issues faced by Black physicists, along with potential ways to address these issues. Besides speaking publicly about equity issues, as a postdoc I am continuing my advocacy, outreach and academic service work for the physics discipline and the broader society in a few other ways.

I am participating as a speaker in the Cal-Bridge seminar series, Science by Diverse Scientists.  Cal-Bridge is a bridge program supported by the National Science Foundation to connect undergraduate California State University students with Ph.D. programs within the University of California system, as well as other partner institutions. The Cal-Bridge program’s mission is to advance undergraduate physics and astronomy research and education among traditionally underrepresented groups, and to increase the number who earn Ph.D.s in those, and related, fields. The primary goal of the Science by Diverse Scientists seminar series is to uplift the voices and increase the representation of physicists and astronomers from underrepresented groups. This ongoing series is particularly impactful to Cal-Bridge scholars because they are from underrepresented groups and seeing successful scientists who they can identify with is inspiring and motivating. Simply put, representation matters.

I am also a co-founder of #BlackinPhysics week on Twitter, which will occur between Oct 25-31, but have impact that lasts fay beyond this week. #BlackInPhysics is a week dedicated not only to celebrating Black physicists and our contributions to the scientific community, but also to reveal a more complete picture of what a physicist looks like. We seek to strengthen intergenerational connections between physicists in the #BlackandSTEM community, encourage long-lasting collaborations, and further push for the development of supportive environments where current and future Black physicists can thrive. In addition, we seek to enhance science literacy within the Black community via engaging communication of physics research, and by inspiring future Black physicists across the world. We have organized a series of engaging panel discussions to support physicists of various rank and interests, social events to connect Black physicists with each other and across sub-disciplines, a three minute thesis competition, and a plan to have a daily op-ed published on a set of topics particularly relevant to Black physicists.

For more information about #BlackInPhysics Week events being hosted by Yale Physics in October 2020, please see this article here.