SIMPLE-ifying the search for dark matter 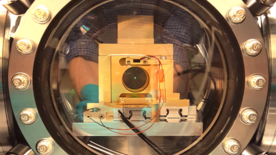 Dark matter is one of the greatest mysteries in contemporary astrophysical research.  By matching theory with observations, scientists believe that approximately 80% of the matter in the Universe is composed of dark matter, yet researchers have been unable to directly detect dark matter and the nature of this substance is unknown.

Because of this, scientists have developed different theories about what dark matter is and how it behaves, and, in turn, have designed different kinds of experiments to test each of these theories.

Although the detailed properties of dark matter remain a mystery, scientists have developed a number of predictions for how it might be detected.  A worldwide effort is underway to detect dark matter in the lab and study its properties .  These searches include experiments, several of which are led by Wright Lab researchers, looking for two of the most popular candidates:  Weakly Interacting Massive Particles (WIMPs) and the axion.

For example, COSINE-100, an international experiment at the Yangyang Underground Laboratory in South Korea led by Wright Lab associate professor of physics Reina Maruyama, is designed to directly detect WIMPs hitting a nucleus and depositing measurable energy in a tiny flash of light in its thallium-doped sodium iodide detectors.  The HAYSTAC experiment, which is located at Wright Lab and co-led by Maruyama and professor of physics Steve Lamoreaux, is designed to search for axions converting to microwave photons in a strong magnetic field using an innovative technique to evade quantum measurement limits.

WIMPs and axions are among the most popular dark matter candidates to search for, in part, because they are predicted to have certain interactions with nuclei or photons that would make their detection possible. However, the astrophysical observations that have established the presence of dark matter only guarantee that dark matter interacts with normal matter through gravity—by far the weakest of the known fundamental forces.

If dark matter only interacts gravitationally, its detection in the lab may be extremely challenging (or even impossible).  However, it would still be expected to exert tiny forces on mechanical sensors, which recent proposals have suggested could be detectable by precisely monitoring the motion of a huge array of masses and searching for tiny kicks from passing dark matter.

Moore’s group has now demonstrated the first search for dark matter using mechanical sensors by searching for these types of kicks of an optically trapped nanogram mass, which was recently published in Physical Review Letters.  The experiment, known as the “Search for new Interactions in a Microsphere Precision Levitation Experiment,” or SIMPLE, is made up of “optical tweezers,” which use a laser to optically levitate, control, and measure micron-sized spheres (“microspheres”).   By measuring the motion of the microsphere, the group, including postdoctoral associates Fernando Monteiro and Gadi Afek and graduate students Jiaxiang Wang and Ben Siegel, can precisely detect extremely tiny impulses (as small as 1 trillionth of the momentum transferred by a feather landing on your shoulder). Due to this sensitivity, the experimental setup is able to search for kicks from passing dark matter using only a nanogram of mass, and exceed the sensitivity (for certain types of dark matter) of experiments using hundreds of kilograms or tons of mass in large underground detectors.  This allows the experiment to fit in a much smaller space, currently in the Moore group’s laboratory at Wright Laboratory.

The sensitivity of this first search is still far from what would be needed to observe interactions due to gravity alone, but sets constraints on certain types of dark matter that could interact with normal matter via a stronger, gravity-like force. Future searches using mechanical sensors may open up an entirely new window in the search for dark matter, as new experiments are developed to take advantage of these types of sensors.

In October 2019, Moore was one of four conveners of a workshop at the Joint Quantum Institute in Maryland called “Quantum Optomechanical Architectures for Dark Matter Detection” to evaluate new methods for detecting dark matter with mechanical sensors.  The meeting was supported by the American Physical Society through the Gordon and Betty Moore Foundation Fundamental Physics Innovation Awards, and the other organizers were Dan Carney of the Joint Quantum Institute, Gordan Krnjaic, from Fermilab and Cindy Regal from JILA.  Harris also attended and contributed to the workshop program with a talk on superfluid optomechanics.  A white paper, “Mechanical Quantum Sensing in the Search for Dark Matter,” summarizing the results of the workshop was submitted to arXiv in August 2020, and will be published in an upcoming special edition of Quantum Science & Technology.  In addition to Moore and Harris, other Yale authors of the white paper include Afek and Monteiro.

Harris’s group is also developing new technologies to control and readout mechanical degrees of freedom of massive objects using light, and has been among the pioneers of the emerging field of quantum “optomechanics.”  These quantum optomechanical sensors can detect tiny excitations of quantized sound (“phonons”), analogous to the searches for axion-induced photons in the HAYSTAC experiment. By taking advantage of the unique mechanical properties of superfluid He, sensors made by the Harris group might also be able to enable new, ultra-sensitive searches for rare interactions from dark matter that would be complementary to the types of searches described above.

The ultimate goal of measuring gravity-strength interactions between dark matter and normal matter in the lab is still likely to be decades away.  For example, despite their state-of-the-art sensitivity, the SIMPLE sensors are still more than 100 times noisier than the “standard quantum limit” (SQL) for measuring their position, and gravitational detection would require much more massive sensors, as well as advanced techniques to go beyond the SQL similar to those now used by HAYSTAC.

Nonetheless, determining the nature of most of the mass in the universe remains a sufficiently difficult problem that ambitious ideas may be required.  If successful, mechanical detection of dark matter would have an additional benefit – the kicks from dark matter would preferentially occur in the direction opposite the earth’s motion through the Milky Way.  If seen, such a signature would be an unambiguous proof that dark matter had finally been detected in the lab.

This article was written by Victoria Misenti and David C. Moore.