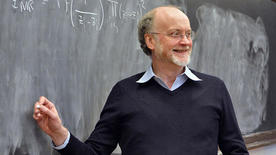 Yale physicist Nicholas Read has been elected a fellow of the Royal Society, one of the most highly regarded honors bestowed upon scientists in the United Kingdom and select foreign institutions.

Read is the Henry Ford II Professor of Physics and professor of applied physics and mathematics in the Faculty of Arts and Science. Born in Great Britain, Read is one of 51 new fellows and 10 foreign members elected to the Royal Society this year.

Read is also a member of the American Academy of Arts and Sciences and the National Academy of Sciences. His many honors include the Dirac Medal and Prize, the Oliver E. Buckley Prize, and membership in the Connecticut Academy of Science and Engineering.

His research focuses on quantum many-particle systems. A theoretical physicist, he is known for his work on the Quantum Hall Effect, a phenomenon that occurs in a two-dimensional system of electrons that is fabricated in a semiconductor device, placed in a strong magnetic field, and cooled almost to absolute zero. His work has been highly influential in the field of condensed matter physics, inspiring a number of discoveries relating to quantum computing.

Founded in 1660, the Royal Society is the oldest scientific academy in continuous existence. Each year up to 52 fellows and up to 10 foreign members are selected from a group of about 700 candidates who are proposed by previous fellows.