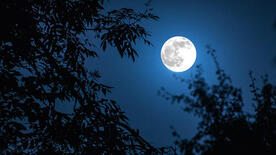 An extra treat is coming Earth’s way for Halloween, compliments of the cosmos.

On Oct. 31, there will be a nearly global blue moon for the first time since 1944, according to the Farmers’ Almanac. Weather permitting, all of the United States — major cities and small towns alike — will get to bask in its pale light.

Michael Faison, a lecturer in the Department of Astronomy and director of the Leitner Family Observatory and Planetarium, spoke with YaleNews about the phenomenon.

What is a blue moon?

There’s an old, pedantic definition that it’s a fourth full moon in a quarter of a year [three months], but the colloquial definition that everyone knows is that a blue moon is the second full moon in a calendar month. Because the full moon in each month has a name in the Farmers’ Almanac calendar — “wolf moon,” “harvest moon,” and all that — the 13th moon in the year was called a “blue moon.”

How rare is it to have a blue moon on Halloween?

Since October has 31 days, and the average time between full moons is 29.5 days, if there’s a full moon on Halloween, it has to be a blue moon. You get the same phase of the moon on the same date in the Gregorian calendar every 19 years.

Cell phone cameras often have trouble capturing the beauty of a full moon. Are there tips for taking more effective photos?

Cell phone cameras are optimized for taking wide-file images. I think the typical field of view of a cell phone camera is 45 to 60 degrees? (OK, I just Googled it, and someone measured that the FOV of an iPhone is 63 degrees.) The angular size of the moon is 1/2 degree, which is about the same size as your pinky finger at arm’s length. The full moon will take up 1/120 of the frame of a cell phone camera, so it will look very small. Furthermore, the moon is very bright against the black sky, so the image processing unit [IPU] in the camera is really going to struggle to get good exposure and contrast, and it will overexpose the image, making the moon look blown out.

Tips for taking photos of the full moon? Use a camera with a zoom lens on a tripod. Eclipse photographers often use 500 to 600mm zoom lenses. Use manual exposure or make sure that the auto exposure is set to under-expose so that the moon is not blown out against the dark sky. Use a slow f-stop [aperture] to minimize chromatic aberration around the bright limb of the moon.

When will the next Halloween blue moon occur?

In 2039, after a 19-year Metonic cycle. That’s when we will have gone through 235 integer number of moon cycles [full moons] and 19 integer cycles of calendar years, so the cycles will be back in sync.