Looking deep inside a diamond planet 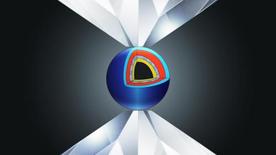 “A carbon-rich planet likely forms from a material called silicon carbide, but at the high temperatures inside of the planet, that silicon carbide would decompose into silicon and diamond,” said lead researcher Kierstin Daviau, a Yale graduate student in geology and geophysics. “The density difference between silicon and diamond would cause the two materials to separate and form layers.”

A study reporting the findings has been published in the journal Physical Review B. Daviau will present the findings at the American Geophysical Union’s upcoming annual fall meeting in New Orleans on Dec. 12.

More than 3,500 exoplanets — planets located outside our solar system — have been discovered in the past two decades. Many of them have been described as super-Earths, which are exoplanets with a mass roughly 1-10 times the mass of Earth. It is believed that some of these rocky planets may differ in their compositions, as compared to Earth.

Many of these super-Earths orbit very close to their stars, which would result in high surface temperatures for the planets. Deep in their interiors, the temperatures likely started off even hotter, easily hot enough to decompose silicon carbide, according to researchers.

Earlier studies have suggested carbon-rich planetary interiors were plausible, while more recent studies identified the planet 55 Cancri e as a potential carbon-rich planet. Understanding such an exotic body is an important goal for scientists as they learn what types of planets and structures are possible in the universe.

“Through these experiments, we are beginning to develop a picture of what the interior of a carbon-rich planet might look like,” said Kanani Lee, the study’s principal investigator and an associate professor of geology and geophysics at Yale. “This is a great example of how laboratory experiments can help us better understand parts of the universe that aren’t accessible.”

Lee’s Yale lab conducted the experiments, in which the samples were compressed to very high pressures and then heated to thousands of degrees with an infrared laser. The Yale team explored pressure and temperature conditions extending to ~2,400 km deep within an Earth-sized planet’s mantle for the study.

Decomposition was identified through the appearance of diamond in the samples after they were brought up to high pressures and temperatures.

Daviau and Lee said the experiments reveal that under higher pressures, it becomes easier to decompose silicon carbide at lower temperatures. This, they said, suggests there is even a region in Earth’s mantle where any silicon carbide present would decompose.

The Carnegie DOE Alliance Center and the CT Space Grant supported the research.