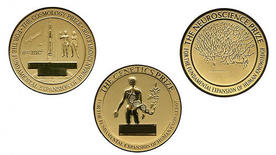 The 2020 Gruber Cosmology Prize recognizes Lars Hernquist, Center for Astrophysics | Harvard & Smithsonian, and Volker Springel, Max Planck Institute for Astrophysics, for their defining contributions to cosmological simulations, a method that tests existing theories of, and inspires new investigations into, the formation of structures at every scale from stars to galaxies to the universe itself.

Hernquist and Springel will divide the $500,000 award, and each will receive a gold laureate pin at a ceremony that will take place later this year. The award recognizes their transformative work on structure formation in the universe, and development of numerical algorithms and community codes further used by many other researchers to significantly advance the field.

Hernquist was a pioneer in cosmological simulations when he joined the fledgling field in the late 1980s, and since then he has become one of its most influential figures. Springel, who entered the field in 1998 and first partnered with Hernquist in the early 2000s, has written and applied several of the most widely used codes in cosmological research. Together Hernquist and Springel constitute, in the words of one Gruber Prize nominator, “one of the most productive collaborations ever in cosmology.”

Computational simulations in cosmology begin with the traditional source of astronomical data: observations of the universe. Then, through a combination of theory and known physics that might approximate initial conditions, the simulations recreate the subsequent processes that would have led to the current structure. By comparing the properties of the simulated universe and galaxies to observations the validity of the underlying cosmological model can be tested.

This tool has allowed Hernquist and Springel, either individually or collaboratively, to show that information from the cosmic microwave background (the relic radiation from the Big Bang) and light spectra from quasars are reliable predictors of present-day galactic structures. They have also used computational simulations to test theories relating to cold dark matter (the invisible matter that comprises roughly four-fifths of the universe’s matter) and dark energy (a mysterious force causing an accelerated late-time expansion of the universe), and how they in concert with ordinary baryons give rise to today’s visible structures.

In addition to their own discoveries, Hernquist and Springel have provided the means for other researchers to transform cosmology. For instance, Hernquist, Springel and their collaborators have emphasized the need for simulations to incorporate feedback—the portion of the outflow of material (such as gas) that feeds back into evolutionary processes. In 2005, working with a collaborator (Tiziana Di Matteo), they demonstrated that black-hole feedback determines the growth relationship between supermassive black holes and their host galaxies.

Thanks to their example, feedback is now a standard component of cosmological simulations at virtually every scale, from stellar evolution, protoplanetary disks, supermassive black holes, gas physics in galaxies and galaxy mergers, to dark matter physics that determines the distribution of superclusters of galaxies into web-like tendrils.

Hernquist and Springel have also written several codes that cosmologists consider indispensable. Hernquist (along with Neal Katz) created TreeSPH, which Hernquist and, subsequently, other researchers used to investigate large-scale structures. Springel wrote two codes that today dominate cosmological research. In 2001 he (with Naoki Yoshida and Simon White) introduced GADGET, which he used in creating the Millennium Simulation, the first dark-matter-only simulation to encompass a representative volume of the universe. The resulting series of images provided a vivid and compelling set of images that helped popularize the idea of a “cosmic web.” Springel also led the creation of AREPO, a moving mesh simulation code which he and Hernquist (and a team of collaborators) subsequently used in the creation of Illustris, a 2014 simulation of the formation of the galaxy distribution across a broad area of the universe.

The problems of cosmic structure formation and the formation and evolution of galaxies are extremely complex, so much so that numerical simulations are the only practical way at present to construct a full theoretical model. The success of contemporary models such as Illustris, which can reproduce properties of the universe from its largest structures to individual galaxies, over nearly the full history of cosmic time, is the result of a marriage between state-of-the-art computation and deep astrophysical insights. This year’s Gruber Cosmology Prize recognizes the leading role in this breakthrough played by Lars Hernquist and Volker Springel.