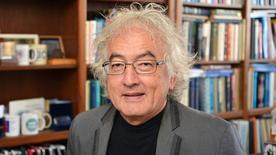 John W. Harris, newly named as the D. Allan Bromley Professor of Physics, focuses his research on creating and understanding the behavior of matter that existed microseconds after the Big Bang. At that time all matter in the Universe was in the form of a hot plasma of quarks and gluons, several hundred thousand times hotter than the sun.

Harris was involved in the original proposal to initiate an experimental program colliding ultra-relativistic nuclei at CERN in Geneva, Switzerland. He was the founding spokesperson for the STAR experiment at Brookhaven National Laboratory on Long Island in NY from 1991 until 2002. His current research focuses on the ALICE experiment at the Large Hadron Collider at CERN, where he served as the national coordinator for the U.S. participation from 2006 to 2012 and on several governing boards in ALICE. He was recently elected chair of the ALICE Collaboration Board to start in 2017.

A graduate of the University of Washington in Seattle, Harris earned master’s and doctoral degrees from Stony Brook University. Following postdoctoral work at the Lawrence Berkeley Laboratory (University of California-Berkeley), he was a senior guest scientist at the Gesellschaft für Schwerionenforschung (Darmstadt, Germany). Harris returned to the Lawrence Berkeley Laboratory as a divisional fellow and then staff senior scientist in its Nuclear Science Division. He joined the Yale faculty in 1996 as a professor of physics.

Harris is the author or editor of several books, including “Handbook of Physics” and “Handbook of Mathematics and Computational Science.” He has contributed numerous research articles, book chapters, and reviews to edited volumes and journals. One article on “Experimental and Theoretical Challenges in the Search for the Quark-Gluon Plasma: The STAR Collaboration’s Critical Assessment” has garnered more than 1,500 citations in the scientific literature.

The Yale professor has served as organizer, panelist, or committee member of numerous international advisory committees throughout the United States and Europe. At Yale, he has contributed to several departmental and university committees, served as director of undergraduate studies and director of graduate studies in the Department of Physics and as chair of the Yale Science Council. He is currently a member of the Faculty of Arts and Sciences Senate and associate chair of the Department of Physics.

Harris was named as one of the Top 40 Distinguished Alumni of Stony Brook University on the occasion of its 40th anniversary in 2002. His other honors include the Alexander von Humboldt Senior Research Award and the Lawrence Berkeley Laboratory Performance Achievement Award. Since 1996, he has been a fellow of the American Physical Society.