Insights & Outcomes: Cellular bet hedgers and a message from a magnetar 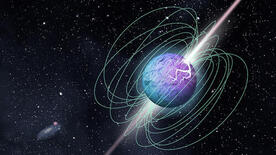 This month, Insights & Outcomes is mindful of the mental health implications of COVID-19, the moments when cells act like portfolio managers, and a missive from a Milky Way magnetar.

As always, you can find more science and medicine research news on YaleNews’ Science & Technology and Health & Medicine pages.

Magnetars, a type of neutron star believed to have an extremely powerful magnetic field, could be the source of some fast radio bursts (FRBs), according to a new study in the journal Nature. FRBs are extremely bright, fast radio emissions that can release more energy in a fraction of a second than the Sun generates over many years. Astronomers discovered the existence of FRBs a decade ago and continue to debate the cause of the signals.

“This is the first evidence of an astrophysical source for one FRB, tying it to a galactic neutron star with a large magnetic field and providing evidence that at least some FRBs are consistent with extragalactic magnetars, based on the brightness of this event,” said co-author Laura Newburgh, an assistant professor of physics at Yale. Newburgh developed new analysis and measurement information that helped establish the brightness of an FRB emanating from a nearby magnetar located in the Milky Way. The Canadian Hydrogen Intensity Mapping Experiment, a collaboration of 50 scientists, produced the research.

Age, sex, and underlying medical issues have been recognized as major risk factors for an adverse outcome from COVID-19 infection. Now Yale psychiatrists say doctors should also consider another factor that increases risk of death in the pandemic — a patient’s mental health. A new study shows that patients with psychiatric disorders admitted to Yale New Haven Hospital for treatment of COVID-19 were significantly more likely to die than those without a diagnosed mental health disorder. The higher mortality rate held even after controlling for other risk factors such age, sex of the patient, and pre-existing health conditions. The authors theorized that psychiatric disorders such as depression may have a harmful effect on patients’ immune system response to infection. “We need to consider the health of the mind as well as the body” when considering treatment options for people diagnosed with COVID-19, said John Krystal, chair of the Department of Psychiatry and senior author of the study. Luming Li, assistant professor of psychiatry, was lead author of the study published in the journal JAMA Network Open.

In times of stability, cell populations act like investors with large portfolios. They hedge their bets by diversifying receptors on the surfaces of individual cells, preparing the population for sudden swings in the environment. But how can these populations respond quickly to unanticipated changes when the process that dictates composition of those receptors — the regulating activity of genes — is typically so time consuming?

A new study of E. coli bacteria by Yale scientists shows that when receiving new environmental signals, the diversity of cellular portfolios is reduced 10-fold, allowing the cell population to adjust to changing circumstances.

Essentially, cells instantly stopped hedging their bets and adjusted their sensitivity to focus on following the present signal, effectively consolidating assets into a winning portfolio. “The mechanism we found enables a population to very rapidly switch from a bet-hedging mode to an exploitation mode,” said Yale’s Thierry Emonet, professor of molecular, cellular, and developmental biology and of physics and co-senior author of the study. “Before this study, all mechanisms reported to do so also involved gene expression, which is orders of magnitude slower.” Keita Kamino is first author of the study, published in the journal Science Advances. The research was conducted in the labs of Emonet and co-senior author Thomas S. Shimizu, group leader at the AMOLF Institute.

Sidi Chen, assistant professor in the Department of Genetics and the Systems Biology Institute and member of the Yale Cancer Center, received a $50,000 research grant from the Alliance for Cancer Gene Therapy (ACGT) to advance a versatile, scalable technology for targeting difficult-to-treat cancers. The technology Chen developed is called MAEGI — Multiplexed Activation of Endogenous Genes as an Immunotherapy — which leverages the natural power of the immune system to fight tumors.

“The ACGT Scientific Advisory Council finds Dr. Chen’s MAEGI technology to be unique and exciting because it simultaneously targets multiple differences and activates multiple immune system responses,” said Kevin Honeycutt, CEO and president of ACGT. “It has proven to be very effective in animal models. We believe our support will enable its advancement into the clinic where it would have major, life-saving impact on pancreatic and other difficult-to-treat cancers, such as melanoma, glioblastoma and triple negative breast cancer.”