Honoring Edward Bouchet and the original Sloane Laboratory, where he studied 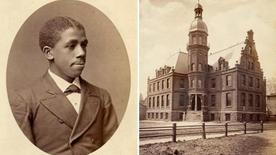 Edward Bouchet broke the color barrier for doctoral students in America in the 1870s, and now the spot where he attended classes and conducted experiments at Yale is being commemorated.

The American Physical Society (APS), representing more than 51,000 physicists, has named the original location of Yale’s Sloane Laboratory as an historic site to honor Bouchet. Sloane Lab was where Bouchet, the first African American to earn a Ph.D. from an American university, did his thesis work and attended classes. He completed his physics dissertation at Yale in 1876.

“The fact that Edward Bouchet was here is a major piece of history for Yale and for the Department of Physics,” said Jack Harris, associate professor of physics and applied physics. “It’s one of the great historic events in this department.”

Bouchet was born in New Haven in 1852, and was valedictorian of his Hopkins Grammar School class in 1870. On his 18th birthday, Bouchet entered Yale College. After finishing his undergraduate studies, he completed a two-year Ph.D. program in physics at Yale, with a thesis that looked at the refraction indices of various glasses.

In 2005, Yale and Howard University founded the first chapters of the Edward A. Bouchet Graduate Honor Society, recognizing outstanding scholarly achievement and promoting diversity and excellence in doctoral education and the professoriate.

The committee also wanted to pursue the idea of getting APS historic site status for the place where Bouchet studied. The original Sloane building is at the current site of Jonathan Edwards College.

Paul Halpern, a professor of physics at the University of the Sciences in Philadelphia and chair of the APS historic sites committee, said 36 sites have been honored thus far. Each was selected with an eye toward the message it sends about the importance of physics and its history.

“By honoring the original Sloane Laboratory we wish to recognize the achievements of Edward Bouchet, the first African-American Ph.D. in physics, and a prominent educator, who was born in New Haven and received his doctorate from Yale,” Halpern said.

A plaque commemorating the honor is being prepared and there will be a campus ceremony next year.