Brooke Russell’s journey of firsts, in physics and at Yale 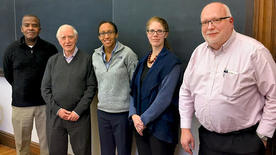 Brooke Russell is all about big ideas.

Since successfully defending her graduate thesis in December — and becoming the first African-American woman to earn a Yale Ph.D. in physics — Russell has joined the Lawrence Berkeley National Laboratory in California as an Owen Chamberlain Postdoctoral Fellow.

Her chosen subfield, neutrinos, involves neutrally charged, subatomic particles that may hold answers to fundamental questions about the nature of matter in the universe. Her specialty, neutrino oscillations, focuses on the way neutrinos can change their “identity” as they move through the cosmos.

Russell’s own journey has taken her from the science stacks at her high school library in Los Angeles to the high-tech instrumentation rooms at Yale’s Wright Lab and on to Berkeley. She also worked closely with Yale physicist Bonnie Fleming at the MicroBooNE experiment in suburban Chicago, where scientists are studying neutrino interactions.

Russell recently spoke to YaleNews about her research and her experiences at Yale.

You’re the first African-American woman to earn a Ph.D. in physics at Yale. How present was that in your thoughts during your time on campus?

Like other students, I was preoccupied with my studies and research, so this point was not continually at the forefront of my mind. Having now become the first black woman to earn a Ph.D. in physics from one of the oldest, most prestigious academic institutions in the world, it is quite humbling and means a great deal to me personally and to my community. I would also say that this feat is long overdue. (In 1876, Edward Bouchet became the first black man to earn a Ph.D. in physics from Yale.)

What fascinated you about physics originally?

A book on special relativity piqued my interest in physics as a high school student. I sought out whatever physics material I could get my hands on through the school library. I found the big ideas I read about, the ones that demystified the “why” and “how” of the fundamental laws of nature, quite striking.

Is there a common theme in the questions you’re drawn to as a scientist?

I started by probing particle astrophysics questions, like “What is dark matter?” and “What fusion reactions govern solar energy generation?” As a graduate student, my research was focused on reconciling conflicting observations from previous experiments concerning the nature of an event signature that may be indicative of a new particle. Now, as a postdoctoral fellow, my work is focused on understanding why there is so much dark matter in the universe and further quantifying the properties of neutrino oscillations through precision measurements.

Why are neutrino oscillations important?

Observation of neutrino oscillations indicates that neutrinos have mass. The Standard Model of particle physics, which has been otherwise robust and accurate in its predictions, fails to account for neutrinos with mass. This is an indication of new physics that we do not yet have a firm grasp on; thus, neutrino physics in general and neutrino oscillation experiments in particular are active areas of worldwide scientific engagement.

Tell us about your work at Yale.

My work aimed to answer a pressing question in neutrino physics: How many neutrino species are there? Within the MicroBooNE experiment, we shed light on this by using a highly-specialized detector — a single-phase liquid argon time projection chamber. Although we weren’t able to resolve the number of neutrino species, my research tried to address the leading capability stipulations required for MicroBooNE’s primary measurement.

How important is mentorship for young scientists — and who were your mentors at Yale?

Mentorship is incredibly important for scientists at all levels.

The early stage of one’s career is a critical time at which the opportunity for a young scientist to engage candidly with a veteran researcher who proffers guidance and insight is invaluable to a young scientist’s growth. In this regard, the faculty in the Yale Department of Physics have been very supportive. I’m particularly grateful to the faculty at Wright Lab who have created a culture for research excellence.

In addition, two doctoral students in my cohort have left an indelible impression on me: Charles Brown (atomic physics, now a postdoctoral associate at UC-Berkeley) and Lyndsey McMillon-Brown (chemical engineering, now a research engineer at NASA), with whom I co-founded the Yale League of Black Scientists, are rising leaders in their respective fields and have inspired many along their journeys.