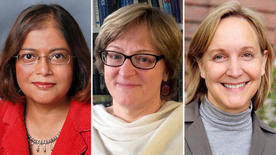 The American Astronomical Society (AAS) has named a trio of Yale astronomers among its inaugural class of fellows.

Sarbani Basu, professor and chair of the Department of Astronomy; Debra Fischer, the Eugene Higgins Professor of Astronomy; and Meg Urry, the Israel Munson Professor of Physics and Astronomy are among the AAS members being honored for their original research, contributions to education and public outreach, and service to the field of astronomy.

“Sarbani Basu’s in-depth study of the dynamics of the sun, Debra Fischer’s discoveries of exoplanets, and Meg Urry’s mapping of black holes exemplify their drive to develop deeper understandings of the universe, and to develop innovative tools to see that which we had thought unseeable,” said Jeffrey Brock, dean of science for the Faculty of Arts and Sciences and dean of the School of Engineering & Applied Science.

AAS was established in 1899 and is the major organization of professional astronomers in North America. Its more than 8,000 members also include physicists, mathematicians, geologists, engineers, and others whose research interests lie within the broad spectrum of subjects now comprising the astronomical sciences.

AAS President Megan Donahue said that the AAS Fellows program will increase the visibility and prestige of astronomy across a range of physical sciences departments. “Our members were missing out on the opportunity to not only celebrate the accomplishments of individual astronomers, but also the success of the field more generally,” she said.

Tamar Gendler, Yale’s dean of the Faculty of Arts and Sciences, said, “At a moment when Yale is renewing our commitment to and investment in the sciences, this honor affirms that our scientists are on the vanguard of exploration and discovery. Sarbani, Debra, and Meg have made foundational contributions to modern astronomy, and I offer them my warm congratulations on this well-deserved honor.”