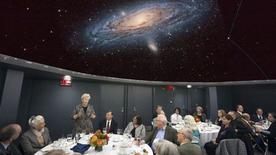 On Oct. 13, the Gruber Foundation and the Departments of Astronomy and Physics presented the 2017 Gruber Cosmology Prize to astrophysicist Sandra Faber of the University of California-Santa Cruz and hosted a one-day conference in her honor.

Faber’s theoretical and observational research has been crucial to everything from the development of new telescopes and technology to the understanding of the structure, dynamics, and evolution of galaxies. The announcement of the prize was made earlier this year. 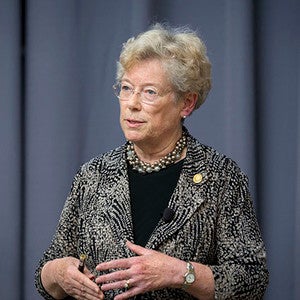 “Rarely has a citation more understated the achievements of the recipient,” said Robert Kennicutt, astronomer at the Institute of Astronomy in the University of Cambridge and chair of the cosmology selection advisory board. “The problems Sandra has devoted her career to have been a generational challenge to many of us.”

At the conference, Faber delivered a lecture titled “Our Universe: Past and Future,” in which she presented an overview of galaxy formation and evolution.

“Cosmology will, in the end, prove to be the most important science for the destiny of human kind,” she said.

The Gruber Foundation was established at Yale to honor and encourage excellence in the fields of cosmology, genetics, neuroscience, justice, and women’s rights. It has continued the International Prize Program of The Peter and Patricia Gruber Foundation, founded by the philanthropists in 1993 as the Peter Gruber Foundation.

Considered among the most prestigious awards in the sciences, the foundation’s $500,000 prizes in cosmology, genetics, and neuroscience honor individuals whose groundbreaking work provides new models that inspire and enable fundamental shifts in knowledge.