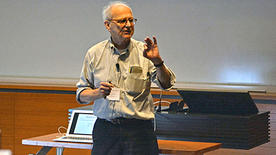 On Oct. 7, the Gruber Foundation and the Departments of Astronomy and Physics hosted the 2016 Gruber Cosmology Conference at the Yale School of Management.

The one-day conference honored the groundbreaking detection of gravitational waves by scientists from the Laser Interferometer Gravitational-Wave Observatory (LIGO). The LIGO team received the 2016 Gruber Cosmology Prize earlier this year.

Two key LIGO scientists, Rainer Weiss of MIT and Kip Thorne of the California Institute of Technology, gave presentations at the conference. “This hit the public consciousness in a way that is quite remarkable,” Weiss noted during his talk. 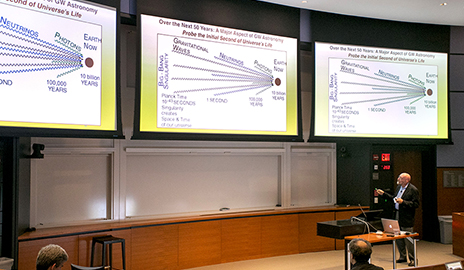 In addition to Thorne and Weiss, speakers at the conference included Peter Saulson of Syracuse University, Nergis Mavalvala of MIT, Daniel Harlow of Harvard, Manuela Campanelli of the Rochester Institute of Technology, and Shep Doeleman of MIT.