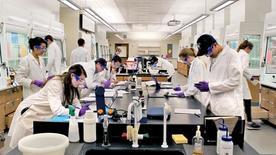 Even state-of-the-art laboratory fume hoods can’t contain the youthful exuberance spilling out of Christine DiMeglio’s organic chemistry class these days. It’s gotten to the point where, one day recently, a student stopped to give DiMeglio a friendly hug on the way out of the lab.

The same vibrancy is also pouring forth from Iain Dawson’s microbiology class, Aruna Pawashe’s molecular biology classes, Stephen Irons’ physics classes — and throughout the newly renovated Sterling Chemistry Lab (SCL). Whether they’re isolating bacteria or chilling lasers, students are finding that an upgrade in the physical environment has led to an upgrade in learning.

“In science, you look for the emergent properties,” said Dale Tager ’17, as he stepped away from his microscope in a second-floor biology lab at SCL. “Having a markedly better lab translates directly into having a better morale and a more cohesive environment for learning.”

Christine DiMeglio (in red) talks with one of the students in her organic chemistry class.

The faculty clearly concurs. “What we have now is an integrated science space,” said Jonathan Parr, who teaches general chemistry and inorganic chemistry on the third floor of SCL. “It’s a mood, and it’s meaningful. “We’re integrating the idea of being in the lab with the idea of being at the center of the university.”

Renovations to SCL encompassed 159,000 square feet, of which 31,600 is additional space. The result included not only the new teaching labs, but also an overhaul of mechanical systems and new lounge areas and student lockers.

Meanwhile, Yale’s laboratory renaissance continues just down the hill on Prospect Street at the School of Engineering and Applied Science (SEAS).

Coinciding with the opening of the new residential colleges in the fall, SEAS will open six new undergraduate teaching labs, along with two wet labs with fume hoods. The project brings together labs from all disciplines in engineering — currently scattered over four buildings — into one space.

In addition to existing gear from current labs, the new labs will be outfitted with new equipment and computers. The labs also have collapsible walls to allow labs with a 24-student capacity to triple in size. Additional storage space and portable equipment will allow labs to be readily adapted for different courses from one semester to the next.

Students collaborate on a class project in one of the physics labs in SCL.

“This is an entirely new way of thinking about hands-on, interdisciplinary teaching,” said SEAS Dean T. Kyle Vanderlick. “It’s flexible, adaptive, and efficient. Students and faculty members from all disciplines will learn from each other and make the most of the full SEAS experience.”

If the experience at SCL is any indication, it won’t take long for the benefits to take hold.

The SCL physics labs, for example, are a veritable hive of scientific activity.

It starts with Physics 205, a laboratory near the main hallway on the second floor. The room is outfitted with groupings of lab benches — all equipped with electrical and Internet capability — and drop-down power outlets on spindles attached to the ceiling, ready to power up projects.

“Today I have them working on electricity and electric fields integration, how moving charges interact with magnetic fields,” explained Irons, who is the director of instructional labs for physics. “Last week we were studying oscilloscopes. We could just plug one into our AV projector and show everyone all of the features at once, rather than bringing it around to each table.”

This room adjoins another lab where these students will continue their physics journey. Here, there are undergraduates investigating the principle of Fourier synthesis, working with superconductors, investigating x-ray diffraction, and getting to know their way around a small interferometer station. There are darkrooms, a seminar room, and a prep room where they can store tools and instructors can create new experiments.

A series of curtained work areas and rooms devoted to advanced experiments adjoin this laboratory. Some students in this space are building a magneto-optical trap while others are conducting a quantum oscillation experiment. Meanwhile, small groups of faculty and students congregate and collaborate, including professor Steve Lamoreaux and associate professor Reina Maruyama.

“You can really keep tabs on everyone here. It’s much more efficient — we’re no longer isolated,” Lamoreaux said. Noted Maruyama, “You can feel the energy here and hear the din of activity. The students are feeding off of each other and learning from one another, and they can look up and see what they’ll be doing next semester.”

Students in Physics 205 studied how electricity and electric fields interact.

They get to work on cutting-edge stuff, as well. In a corner room, Nir Navon, an assistant professor who arrived at Yale just a few months ago, is setting up an advanced lab that will produce a quantum gas in the next two years or so. Navon will divide the tasks so that students can be part of the process, learning new skills while gaining an understanding of what it is like to be involved in a major Yale physics project.

“These experiments are all stepping stones to faculty research,” said senior lecturer Sidney Cahn, who oversees the advanced labs. “They spark the imagination.”

A boost for biology

In another part of SCL’s second floor, Dawson has wrapped up a microbiology lab session. His students (most of them will continue on to medical school) are taking off their white lab coats and clearing their workbenches.

The lab layout is arranged in “islands,” to encourage student interaction. As befits a biology laboratory, there are neatly organized test tubes and beakers at the ready, as well as microscopes and refrigerators for storing samples.

In this session, the students isolated bacteria from the human body and conducted a range of biochemical tests to identify the types of bacteria they found.

Dawson said one of the advantages of a top-shelf biology laboratory is something students never see: the quality of the air. Especially during spring and autumn, airborne fungal spores might easily contaminate biological specimens and samples that students are working on in class. Having the latest air control technology safeguards those specimens.

“It makes a huge difference,” Dawson said. “A great deal of thought has gone into everything here, right down to the windows that allow us to see our colleagues and classmates across the hall.”

Back on the third floor of SCL, the air in DiMeglio’s organic chemistry lab includes a faint smell of bananas.

This is because her students are at work making isopentyl acetate, or banana oil. One student weighs her banana oil product at the end of a reaction; another performs thin-layer chromatography on her purified banana oil; a third student completes the purification of his banana oil via distillation.

Jonathan Tyson, a first-year graduate student, is a teaching assistant in chemistry.

“Every day is an adventure in this lab,” DiMeglio said. “We’re preparing our students for the techniques and safety standards they’ll encounter in industry and research.”

DiMeglio wears a red lab coat, identifying her as an instructor. The undergraduates around her wear white coats and graduate teaching assistants wear blue lab coats.

Near a centrally located whiteboard, a group of students focuses on teaching assistant Jonathan Tyson, a first-year graduate student. He’s organized an in-class competition for students during a break from their isopentyl acetate work.

“Here’s a good one,” Tyson said. “Can you define reflux? Can you also tell me why we use it?” The white coats go to work on the question, while Tyson takes a moment to tell a visitor what he likes best about the new Yale labs.

“It’s the hoods,” he said, nodding toward one of the dozens of glass-enclosed fume hoods that fill the laboratory. “When you have the best equipment, you can do your best work.”