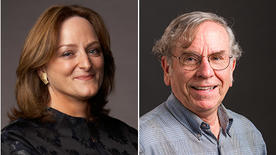 Professors  C. Megan Urry  and  Frederick J. Sigworth  have been elected to the National Academy of Sciences (NAS) in recognition of their distinguished and continuing achievements in original research.

They are among 84 new members and 21 foreign associates from 14 countries selected for membership. The new members were announced May 3. Election to membership in the academy is considered one of the highest honors that can be afforded to a U.S. scientist or engineer.

Urry is the Israel Munson Professor of Physics and Astronomy. She is president of the American Astronomical Society, director of the Yale Center for Astronomy & Astrophysics, a former member of the Hubble space telescope faculty, and former chair of the Yale Department of Physics (2007 to 2013).

Urry’s research has focused on supermassive black holes and the interplay between black hole growth and star formation in the evolution of galaxies. She has published more than 250 refereed research articles on black holes and galaxies, and is widely recognized as a national advocate for increasing the number of women and minorities in science.

Sigworth’s research unravels the workings of ion channel proteins, the “molecular machines” that switch on and off electrical currents that are carried by ions across biological membrane proteins. His lab at Yale is pursuing new approaches to obtain 3D structures of these proteins.

“We are delighted that Meg and Fred have been elected to the National Academy,” said Steven Girvin, deputy provost for research. “Meg’s research on black holes in galaxies and Fred’s research advancing new methods in electron microscopy nicely illustrates the depth and breadth of scientific inquiry going on at Yale.”

Sigworth and Urry will be formally inducted as members at next year’s NAS annual meeting. Their membership brings the total number of active NAS members to 2,291.

The NAS is a private, nonprofit institution established under a congressional charter signed by President Abraham Lincoln in 1863.