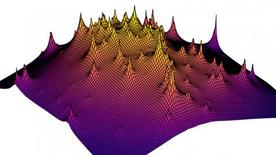 A Yale-led team has produced one of the highest-resolution maps of dark matter ever created, offering a detailed case for the existence of cold dark matter — sluggish particles that comprise the bulk of matter in the universe.

The dark matter map is derived from Hubble Space Telescope Frontier Fields data of a trio of galaxy clusters that act as cosmic magnifying glasses to peer into older, more distant parts of the universe, a phenomenon known as gravitational lensing.

Yale astrophysicist Priyamvada Natarajan led an international team of researchers that analyzed the Hubble images. “With the data of these three lensing clusters we have successfully mapped the granularity of dark matter within the clusters in exquisite detail,” Natarajan said. “We have mapped all of the clumps of dark matter that the data permit us to detect, and have produced the most detailed topological map of the dark matter landscape to date.”

Scientists believe dark matter — theorized, unseen particles that neither reflect nor absorb light, but are able to exert gravity — may comprise 80% of the matter in the universe. Dark matter may explain the very nature of how galaxies form and how the universe is structured. Experiments at Yale and elsewhere are attempting to identify the dark matter particle; the leading candidates include axions and neutralinos.

“While we now have a precise cosmic inventory for the amount of dark matter and how it is distributed in the universe, the particle itself remains elusive,” Natarajan said.

Dark matter particles are thought to provide the unseen mass that is responsible for gravitational lensing, by bending light from distant galaxies. This light bending produces systematic distortions in the shapes of galaxies viewed through the lens. Natarajan’s group decoded the distortions to create the new dark matter map.

The high-resolution simulations used in the study, known as the Illustris suite, mimic structure formation in the universe in the context of current accepted theory. A study detailing the findings appeared Feb. 28 in the journal Monthly Notices of the Royal Astronomical Society.

The research was supported in part by grants from the National Science Foundation, the Science and Technology Facilities Council, and NASA via the Space Telescope Institute HST Frontier Fields initiative.

The study can be found online.