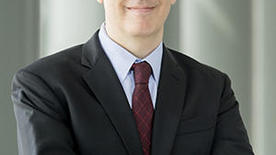 Peter Schiffer, an experimental physicist currently at the University of Illinois at Urbana Champaign, has been named the university’s inaugural vice provost for research — a post created to bring a new level of strategic attention to Yale’s science and research enterprise, announced President Peter Salovey and Provost Benjamin Polak.

Schiffer will arrive in New Haven — also joining the Yale faculty as professor of applied physics — in October.

“As vice provost for research, Professor Schiffer will be a vital member of the university’s leadership team while providing broad oversight and attention to the people, services, facilities, and other resources that comprise Yale’s scientific enterprise,” wrote Salovey and Polak in the email announcing the appointment. “His charge is to support and enhance research across all of our schools and departments, and to propel Yale to the vanguard of 21st-century research institutions. He will be a crucial partner in achieving our goal ‘to be a world leader in basic, translational, and applied scientific and social scientific research, deepening our commitment to the innovative application of new knowledge beyond our campus and transcending disciplinary boundaries and methodological traditions.’”

Schiffer has been a professor of physics and vice chancellor for research at University of Illinois at Urbana-Champaign since 2012. While he is a newcomer to the Yale faculty, he is not new to the university community, having earned his B.S. in physics from Yale College in 1988. After receiving his Ph.D. in physics from Stanford University in 1993, he undertook postdoctoral work at AT&T Bell Laboratories, conducting seminal research in emerging areas of the study of magnetism, before launching his faculty career as an assistant professor of physics at the University of Notre Dame. He then rose through the ranks at Pennsylvania State University, achieving tenure and serving a five-year term as associate vice president for research and director of strategic initiatives.

“He brings to his new position a decade of experience in university leadership and an impressive record of institutional strategic planning, policy development, and directing campus-wide and cross-disciplinary initiatives,” said Salovey and Polak.

Yale’s new vice provost is recognized as an international leader in experimental condensed matter physics, specializing in the study of magnetic systems. His research has focused on magnetic thin films, geometrically frustrated magnets, colossal magnetoresistance manganites, and the physics of granular materials. Over the past decade, he has led pioneering efforts in the study of artificial spin ice, initiating with his collaborators a new field of inquiry that now engages researchers around the globe. He has published extensively, co-authoring more than 200 papers and amassing over 10,000 total citations of his work. He is a fellow of the American Physical Society and the recipient of numerous academic honors including an Alfred P. Sloan Research Fellowship, a Presidential Early Career Award from the Army Research Office, a National Science Foundation Early Career Development Award, and the Howard Schultz Award for Research in Physics when he was a senior in Yale College.

Schiffer will be joined at Yale at the end of the year by his wife, Professor Sharon Hammes-Schiffer, who will serve as the inaugural John Gamble Kirkwood Professor of Chemistry. Hammes-Schiffer is currently a Swanlund Professor of Chemistry at the University of Illinois at Urbana-Champaign; she is a renowned theoretical chemist, who specializes in modeling and simulation of quantum mechanical processes in systems of relevance to both energy and biological sciences. She is a member of the National Academy of Sciences and the American Academy of Arts and Sciences, and is editor-in-chief of the journal Chemical Reviews. The couple have two sons, Zachary and Benjamin, who are students at the Massachusetts Institute of Technology and Princeton University, respectively.

In closing, Salovey and Polak wrote, “[W]e reiterate our congratulations and appreciation to Steve Girvin, the Eugene Higgins Professor of Physics, for his 10 outstanding years as deputy provost for research. Over the course of his tenure, Steve led the development of our faculty and our research infrastructure, building a collaborative, university-wide approach to scientific excellence and laying a strong foundation for future growth and success.”