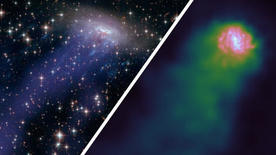 It has been known for some time that when distant galaxies — and the supermassive black holes within their cores — aggregate into clusters, these clusters create a volatile, highly pressurized environment. Individual galaxies falling into clusters are often deformed during the process and begin to resemble cosmic jellyfish.

Curiously, the intense pressure squelches the creation of new stars in these galaxies and eventually shuts off normal black hole feeding on nearby interstellar gas. But not before allowing the black holes one final feast of gas clouds and the occasional star.

The researchers also suggested this rapid feeding might be responsible for the eventual lack of new stars in those environments. The research team said “outflows” of gas, driven by the black holes, might be shutting off star formation.

“We know that the feeding habits of central supermassive black holes and the formation of stars in the host galaxy are intricately related. Understanding precisely how they operate in different larger-scale environments has been a challenge. Our study has revealed this complex interplay,” said astrophysicist Priyamvada Natarajan, whose team initiated the research. Natarajan is a professor of astronomy and physics in Yale’s Faculty of Arts and Sciences.

The study is published in the Astrophysical Journal Letters. The first author is Angelo Ricarte, a former member of Natarajan’s lab now at Harvard, who started this work as a Yale doctoral student. Co-authors are Yale Center for Astronomy and Astrophysics Prize postdoctoral associate Michael Tremmel and Thomas Quinn of the University of Washington.

The new study adds to a significant body of work from Natarajan’s research group regarding how supermassive black holes form, grow, and interact with their host galaxies in various cosmic environments.

The researchers conducted sophisticated simulations of black holes within galaxy clusters using RomulusC, a cosmological simulation that Tremmel, Quinn and others developed.

Ricarte developed new tools for extracting information from RomulusC. While analyzing black hole activity in the cluster simulation, he said, he noticed “something weird happening once their host galaxies stopped forming stars. Surprisingly, I often spotted a peak in black hole activity at the same time that the galaxy died.”

That “peak” would be the black hole’s big, final feast, under pressure.

Tremmel said that “RomulusC is unique because of its exquisite resolution and the detailed way in which it treats supermassive black holes and their environments, allowing us to track their growth.”