Research Note: An illuminating look at large galaxies and their closest companions 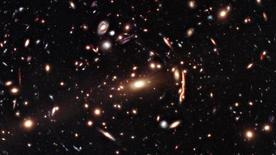 Yale astronomers conducted a first-of-its-kind survey of some of the largest and most massive galaxies in the universe — and the loose stars that tag along for the ride. These large galaxies (known as Brightest Cluster Galaxies) are composed of very old stars and very little gas, and rarely form new stars. However, they sometimes mix with random stars that surround them. The Yale team measured the ages, chemical compositions, and mass of both groups of stars. “Whereas the properties of the stars in the galaxies are all very similar — old and rich in heavy metals — the loose stars reveal a component of younger, metal-poor stars that doesn’t exist anywhere else in the system,” said first author Louise Edwards. “This is consistent with the idea that the source of the loose stars is different than that which makes up the galaxies, and implies a different formation mechanism.” Co-authors are Yale undergraduates Hannah Alpert, Isabella Trierweiler, Tara Abraham, and Victoria Beizer.

The study appears online in the journal Monthly Notices of the Royal Astronomical Society.