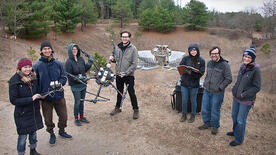 Built at BNL in 2017, the prototype BMX serves as a testbed, with a goal of learning lessons for developing a larger radio telescope, in collaboration with other national laboratories, universities, and international partners, to map neutral hydrogen over large swaths of the universe, enabling researchers to gain a better understanding of its accelerated expansion, as well as the nature of dark energy.

“Traditional radio telescopes are often focused on sensitivity, but this telescope is all about calibration. We want to know exactly what the telescope sees with the accuracy of one part in a thousand, or better,” said Anže Slosar, a physicist at Brookhaven Lab. “Eventually, we would propose building a telescope with thousands of dishes, but the calibration method would be the same. So, if we can show that we calibrated the prototype to the right precision, then we know we can do that for a larger telescope as well.”

To calibrate BMX with a drone, on March 9-13, 2020 the Newburgh group mounted a small radio source to a hexacopter drone and then flew it over the telescope, making a grid pattern over the telescope’s entire field of view. By comparing the drone’s known flight path from GPS signals to the radio signals picked up by BMX, the researchers are able to determine what signals were missed by the telescope.

“This method of calibrating telescopes has been around for about 10 years, but it’s very hard to do in practice,” said graduate student Emily Kuhn. “One of the main difficulties is knowing exactly where the drone is with sufficient precision. We solved this problem by using a differential GPS (DGPS).”

Compared to GPS, DGPS achieves far greater precision—down to a centimeter, rather than a meter—through an additional ground-based station.

Newburgh said, “drone-based calibrators solve many problems in calibrating 21cm stationary telescopes, which need to be precisely calibrated in order to detect incredibly faint signals, but we can’t understand how well we’re doing unless we actually try to calibrate a telescope.”

She continued, “the majority of our scientific telescopes are in radio quiet zones, and so flying radio sources around is highly regulated. This means we need telescopes that are fairly well characterized already, and ideally local. BMX is perfect. It is a ferry ride away and it is designed as a radio test-bed, so new calibration techniques are welcome for testing by our BNL collaborators, and it is in a difficult radio frequency interference (RFI) environment, which means we can fly any time, and also helps us exercise our analysis pipeline in a harsh environment.”

Kuhn added, “because our research telescopes are based in Canada and South Africa, being able to test the drone calibration technique at a nearby facility gives us a great opportunity to fine-tune our measurements before we make the effort to travel to another country.”

The resulting data set from the first run included critical work from all members of the Wright Lab team, including three undergraduates, Maile Harris, Annie Polish, and Ry Walker.  Harris and Polish focus on working with the drone, understanding its accuracy, and designing and executing the flight pattern.  Walker made the initial measurements of the drone-only location data, found it was not adequate, and led the team’s choice of their current differential GPS on the drone.

Graduate students on the project are Kuhn, who has led the development of the radio calibration instruments flown on the drone and analysis of the data, and Will Tyndall, who was a Masters student on BMX and has contributed to data acquisition and analysis.

Postdoctoral associate Benjamin Saliwanchik, who has recently accepted a position at BNL as a Research associate to work on BMX and a proposed next-generation radio telescope array called PUMA (the Packed Ultra-wideband Mapping Array), served as the overall measurement lead, ensuring smooth drone measurements for the week.  Saliwanchik will continue to be involved with the drone calibration collaborative project between Yale and BNL in his new position.

The calibration experiments at BMX are still ongoing, and the Newburgh group will continue to work with the team from BNL to collect more data from the drones.

“We enjoy an exciting collaboration where both groups get to learn things,” Newburgh said. “BMX can gain understanding about its polarized beams, we can learn how well our drone calibrator is working, and we are gaining crucial knowledge for the community in planning future 21cm arrays.”