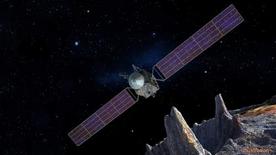 NASA recently announced a pair of new space missions to explore questions about the earliest stages of our solar system. One of the missions, Psyche, will send an unmanned spacecraft to 16 Psyche, a large asteroid in the primary asteroid belt between Mars and Jupiter.

Arizona State University is the lead institution for the mission. The spacecraft, to be built by NASA’s Jet Propulsion Laboratory, is scheduled to launch in 2023 and arrive at the asteroid in 2030.

David Bercovici, Yale’s Frederick William Beinecke Professor of Geophysics, is a co-investigator for the project. Part of his role will be to study the internal dynamics of 16 Psyche.

“Psyche is almost certainly an iron-nickel alloy asteroid, possibly formed after a larger body, like a dwarf planet, had its mantle stripped away from a violent collision with another asteroid. So, Psyche is probably the exposed core of a small planet,” Bercovici said.

Earth’s core is 3,000 km away, and harder to observe than distant galaxies, Bercovici explained. We can only “see” it through seismology after large earthquakes send seismic waves through and around the core. But Earth’s core is important, he explains, because it generates the planet’s magnetic field, which, with a compass, can be used to navigate, and which protects us from charged solar radiation.

“Thus, the incredible thing about this mission is that, in a way, we’re going through space to learn about the core of our own planet,” Bercovici said.