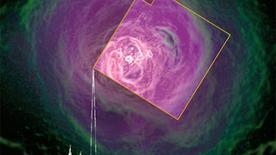 In its brief time gathering data this year, the Hitomi X-ray Observatory discovered something quite serene: the calm core in a massive cluster of galaxies.

Scientists from the international Hitomi mission report July 6 in the journal Nature that a “remarkably quiescent atmosphere” exists at the heart of the Perseus cluster, located in the constellation Perseus. The new information, obtained with an innovative Soft X-ray Spectrometer (SXS), gives astronomers fresh insight into the dynamics of the hot, flowing gas that pervades galaxy clusters and other important astrophysical phenomena.

Yale played a prominent role in the project. Andrew Szymkowiak, a Yale senior research scientist in astronomy and physics, was a key member of the SXS development team over the past 30 years. Meg Urry, Yale’s Israel Munson Professor of Physics and Astronomy; Paolo Coppi, professor of astronomy and physics; and Szymkowiak are co-authors of the new study. The principal investigator is Tadayuki Takahashi of the Japanese Aerospace Exploration Agency (JAXA) and the University of Tokyo.

“This cluster contains an active galaxy in its core, and there is clear evidence in previously obtained x-ray images that outflows from this ‘central engine’ have injected shocks and bubbles into the cluster core,” Szymkowiak said. “The surprising result from the spectra obtained with the SXS is that the bulk of the x-ray gas only shows evidence for very small amounts of turbulence from these outflow events.”

Measuring the amount of turbulence is important, the researchers said, because the size of galaxy clusters is a useful tool for measuring the parameters of cosmology and the growth of structure in the universe.

The Hitomi mission launched in February, led by JAXA and featuring participation from NASA, the European Space Agency (ESA), and research institutions around the world. The project previously had gone by the name ASTRO-H.

Hitomi was intended to spend several years studying the formation of galaxy clusters and the warping of space and time around black holes. The spacecraft featured a number of cutting-edge technologies, including the SXS, built to generate the most accurate X-ray measurements to date of objects in deep regions of space.

Unfortunately, the mission went awry just weeks after the launch, when JAXA lost control of the spacecraft. Several additional scientific papers are expected to emerge from the initial Hitomi data.