Could a neutrino be its own antiparticle? Yale physicists hunt for clues 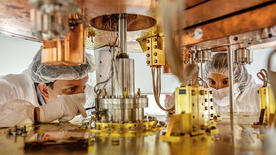 Physicists from Yale are looking deep beneath a mountain in central Italy for proof of how matter was created in the universe — and a new batch of data is narrowing the search.

The Yale researchers, part of an international collaboration called the Cryogenic Underground Observatory for Rare Events (CUORE), are searching for evidence of a rare particle process called neutrinoless double-beta decay. Finding it, they say, would have profound implications for understanding neutrinos — the ghostly, plentiful particles that pass through most matter in the universe without being affected themselves. The process might also help explain why there is more matter in the universe than antimatter (which has the same mass as matter, but an opposite electric charge).

Standard double-beta decay is a proven particle process. Two neutrons, which are uncharged particles in the nucleus of an atom, transform into two protons and emit two electrons and two antineutrinos. Antineutrinos are the antimatter counterpart to neutrinos.

CUORE — an array of 988 cube-shaped crystals that are stacked in 19 copper-cladded towers and chilled to nearly absolute zero, the coldest possible temperature in the universe — is designed to detect the signature of this theoretical process. 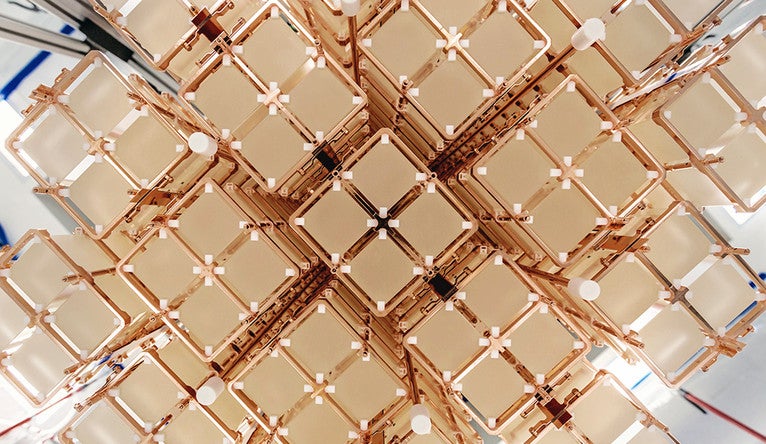 A bottom view of the CUORE towers installed in the cryostat. (Credit: CUORE Collaboration)

“CUORE is an engineering feat,” said Yale physics professor Reina Maruyama, a member of the CUORE team. “We cooled 988 detectors (containing a total of 740 kg of tellurium oxide and several tons of lead) down to 10 mK (millikelvin). We keep them cooled for years at a time. We are searching for (neutrinoless double-beta) decays with a half-life longer than 10 to the 26th power — that’s 10 million-billion times the lifetime of the universe.”

A half-life is the amount of time it takes for radioactivity to reduce by half.

The experiment is set under a mountain in order to shield it from cosmic rays and other disruptive environmental backgrounds. It is located at Gran Sasso National Laboratories, part of the Italian Institute for Nuclear Physics.

CUORE is an engineering feat. … We are searching for decays with a half-life longer than 10 to the 26th power — that’s 10 million-billion times the lifetime of the universe.

CUORE recently released two years’ worth of data collection, from 2017 to 2019. It represents a dataset four times larger than the initial CUORE results announced in 2017, which at that time established the most precise measurement for the experiment.

While the new result did not show evidence of neutrinoless double-beta decay, it yielded a better idea of a neutrino’s mass during such a process. The CUORE detector is sensitive to a particle mass less than one-tenth of an electronvolt — or at least 5 million times lighter than an electron.

“To reach this level of precision, CUORE is located miles underground and uses special materials such as ancient lead to shield the sensitive detectors,” said Karsten Heeger, professor and chair of physics at Yale, director of the Wright Lab, and a member of the CUORE team.

“For now,” he said, “the laws of physics as we know them are still safe, but we still don’t have clues for how we ended up with more matter than antimatter in the universe.”

Researchers are working on a follow-up experiment called CUORE Upgrade with Particle Identification (CUPID) that would extend the sensitivity of CUORE’s measurements by 10-fold.