Ch-ch-ch-changes in a distant quasar 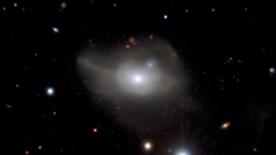 Yale astronomers Grant Tremblay and Meredith Powell are part of the first research team to document a “changing look” quasar through a full cycle from dim to bright to dim again.

Quasars are the extremely bright cores found in some galaxies, powered by supermassive black holes. Their brightness is believed to come from the hot material that falls into the black hole, a process called accretion.

“Thirty years ago this supermassive black hole very dramatically brightened, becoming a Type 1 quasar,” Tremblay said. “We discovered this year that it has now dimmed again, making it the first such object to go ‘there and back again.’”

Two research studies of the object — galaxy Markarian 1018 — will appear in the journal Astronomy & Astrophysics. A portion of the data used in the studies comes from the Close AGN Reference Survey (CARS), a sampling of 40 nearby Active Galactic Nuclei. Yale is a founding member institution of the survey.