This black hole has an appetite for cold, cosmic rain 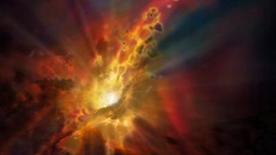 In a new study to be published June 9 in the journal Nature, a Yale-led team of astronomers found a supermassive black hole about to devour clouds of cold, clumpy gas hurtling toward it. Prior to this, scientists believed that supermassive black holes in the largest galaxies fed on a slow, steady diet of hot, ionized gas from the galaxy’s halo.

“Although it has been a major theoretical prediction in recent years, this is one of the first unambiguous pieces of observational evidence for a chaotic, cold ‘rain’ feeding a supermassive black hole,” said Yale astronomer Grant Tremblay, lead author of the study. “It’s exciting to think we might actually be observing this galaxy-spanning ‘rainstorm’ feeding a black hole whose mass is about 300 million times that of our Sun.”

The discovery offers new insight into the way black holes ingest fuel, a process called accretion. The most common way for black holes to feed is by taking in hot, ionized gas that spirals in slowly from a surrounding disc of cosmic material.

Tremblay’s team analyzed data from the Atacama Large Millimeter/submillimeter Array (ALMA) telescope in Chile to map the locations and movement of cold molecular gas in the Abell 2597 Cluster — a knot of about 50 galaxies located 1 billion light years from Earth. The researchers detected a trio of cold gas clouds, traveling as fast as a million kilometers per hour, heading toward a black hole in a galaxy at the center of the cluster. Each gas cloud contained as much material as a million Suns and measured tens of light-years across.

“We can’t know whether all or only part of this ‘meal’ of cold gas will ultimately fall into the black hole, but the ALMA data spectacularly highlights the importance of this kind of cold accretion,” said co-author C. Megan Urry, the Israel Munson Professor of Physics and Astronomy at Yale.

Added co-author Louise Edwards, who is an astronomy lecturer and researcher at Yale: “Since we know so little about the mechanics of how the AGN (active galactic nucleus) interacts with the rest of the galaxy, this is a real step forward.”

The researchers said they plan to use ALMA to search for similar “rainstorms” in other galaxies to determine if such cosmic weather is a common phenomenon.

The international team also included researchers from the Massachusetts Institute of Technology’s Kavli Institute for Astrophysics and Space Research, the Rochester Institute of Technology, Michigan State University, the Harvard-Smithsonian Center for Astrophysics, the Naval Research Laboratory Remote Sensing Division, the University of Michigan, the University of Rochester, and institutions in Germany, the Netherlands, France, Canada, the United Kingdom, and Mexico.

Learn more about Yale’s Department of Astronomy by watching the new film, “Astronomy at Yale,” on YouTube.