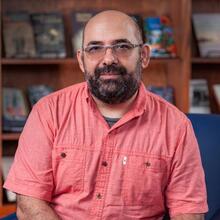 Linkages, networks of nearly rigid bars meeting at freely rotating joints, serve as a simple mathematical model underpinning a variety of physical systems, from molecules to disordered spring networks to origami. Recent advances in fabrication such as 3D printing has driven a resurgence of interest in designing mechanical systems based on linkages that can serve as “mechanical metamaterials”, materials whose properties can be controlled by cleverly designing their structure. While this idea is powered by an old adage, “One can design a linkage which will sign your name!”, in practice it turns out to be very hard to do. I will discuss recent work in our group on understanding the mechanics of origami and other meta-materials from the point of view of designing and controlling “singularities,” places where the configuration space of a mechanism fail to be smooth. Though rare in principle, they are common in practice. I will discuss how this sheds light on the surprising rigidity of very under-coordinated networks of springs when stretched and how these ideas arise in origami folding.
Host: Jack Harris (jack.harris@yale.edu)
The Colloquium series of the Yale Physics Department is called the Physics Club. The name dates to the late 1890s, the era of J Willard Gibbs, who influenced the intellectual life at Yale through a number of “graduate clubs”. He was one of the founders of the Mathematics Club which originated in 1877; he served as its executive officer for ten years. The Physics Club first met on the evening of Oct. 31, 1899, with 13 in attendance. Ever since, Physics Club has met regularly through each academic year, though in a break with tradition, we do no meet on the evening of Halloween. (Reference: Suha Gürsey, The History of Physics at Yale 1701-1970 (c) 2000.)
Physics Club is a weekly colloquium of general interest to the Department of Physics, Applied Physics, Astronomy, and Mathematics. The series is aimed at graduate students, postdoctoral researchers, research staff and faculty. For more information, or to request a Zoom link to attend, please send an E-mail with your name and institutional affiliation to Taylor Dunnigan, Departmental Events Coordinator.