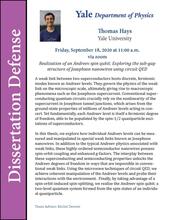 A weak link between two superconductors hosts discrete, fermionic modes known as Andreev levels. They govern the physics of the weak link on the microscopic scale, ultimately giving rise to macroscopic phenomena such as the Josephson supercurrent. Conventional superconducting quantum circuits crucially rely on the nonlinearity of the supercurrent in Josephson tunnel junctions, which arises from the ground-state properties of millions of Andreev levels acting in concert. Yet fundamentally, each Andreev level is itself a fermionic degree of freedom, able to be populated by the spin-1/2 quasiparticle excitations of superconductors.
In this thesis, we explore how individual Andreev levels can be measured and manipulated in special weak links known as Josephson nanowires. In addition to the typical Andreev physics associated with weak links, these highly-ordered semiconductor nanowires possess spin-orbit coupling and enhanced g-factors. The interplay between these superconducting and semiconducting properties unlocks the Andreev degrees of freedom in ways that are impossible in conventional weak links. Using the microwave techniques of circuit QED, we achieve coherent manipulation of the Andreev levels and probe their interactions with the environment. Finally, by taking advantage of a spin-orbit-induced spin-splitting, we realize the Andreev spin qubit: a two-level quantum system formed from the spin states of an individual quasiparticle.
Thesis Advisor: Michel Devoret