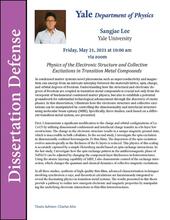 In condensed matter systems novel phenomena such as superconductivity and magnetism can emerge from an intricate interplay between the materials lattice, spin, charge, and orbital degrees of freedom. Understanding how the structural and electronic degrees of freedom are coupled in transition metal compounds is crucial not only from the viewpoint of fundamental condensed matter physics, but also to establish a potential groundwork for substantial technological advancement through the discovery of exotic phases. In this dissertation, I illustrate how the electronic structure and collective excitations can be manipulated by controlling the dimensionality and interfacial structure using molecular beam epitaxy (MBE). Specifically, three studies, each based on a different transition metal system, are presented.
First, I demonstrate a significant modification to the charge and orbital configurations of LaCoO3 by utilizing dimensional confinement and interfacial charge transfer in a bi-layer heterostructure. The change in the electronic structure results in a unique magnetic ground state, which is inaccessible in bulk cobaltates. In the second study, I investigate the spin excitation in dimensionally confined ferromagnetic Fe thin films. The dispersion of the spin excitation evolves anisotropically as the thickness of the Fe layers is reduced. This physics of this scaling is accurately captured by a simple Heisenberg model based on spin exchange interactions. In the last study, I investigate how the spin exchange pattern in the antiferromagnetic phase of NdNiO3 can be adjusted by changing the component layer thicknesses in heterostructures. Using the atomic layering capability of MBE, I also demonstrate control of the exchange interaction, which changes the quantum and classical dynamics of collective magnetic excitations.
In all three studies, synthesis of high-quality thin films, advanced characterization techniques involving synchrotron x-rays, and theoretical calculations are harmoniously integrated to reveal the fascinating physics in transition metal systems. The results presented in this thesis provide a pathway to realize new emergent electronic and magnetic properties by manipulating the underlying electronic interactions in thin film heterostructures.
Thesis Advisor: Charles Ahn (charles.ahn@yale.edu)