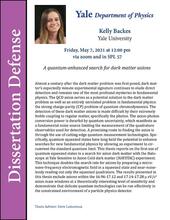 Almost a century after the dark matter problem was first posed, dark matter’s expectedly minute experimental signature continues to elude direct detection and remains one of the most profound mysteries in fundamental physics. The QCD axion serves as a potential solution to the dark matter problem as well as an entirely unrelated problem in fundamental physics: the strong charge-parity (CP) problem of quantum chromodynamics. The detection of these dark matter axions is made difficult by their extremely feeble coupling to regular matter, specifically the photon. The axion-photon conversion power is dwarfed by quantum uncertainty, which manifests as a fundamental noise source limiting the measurement of the quadrature observables used for detection. A promising route to finding the axion is through the use of cutting-edge quantum measurement technologies. Specifically, quantum squeezed states have long held the potential to enhance searches for new fundamental physics by allowing an experiment to circumvent the standard quantum limit. This thesis reports on the first use of quantum squeezed states in a search for axion dark matter with the Haloscope at Yale Sensitive to Axion Cold dark matter (HAYSTAC) experiment. This technique doubles the search rate for axions by preparing a microwave-frequency electromagnetic field in a squeezed state and near-noiselessly reading out only the squeezed quadrature. The results presented in this thesis exclude axions within the 16.96-17.12 and 17.14-17.28 μ eV/c2 axion mass windows at a theoretically interesting level of sensitivity and demonstrate that delicate quantum technologies can be run effectively in the constrained environment of a particle physics detector.
Thesis Advisor: Steve Lamoreaux (steve.lamoreaux@yale.edu)
Contact Stacey Watts (stacey.watts@yale.edu) for zoom link.