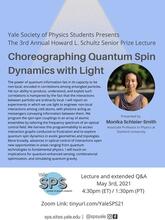 The Howard L. Schultz Sr. Prize Lecture is given each year by a distinguished physicist in honor of Howard L. Schultz, Sr. who received his PhD in Physics from Yale in 1937 and joined the Yale physics faculty in 1945. This year, the Yale Society of Physics Students is excited to welcome Professor Monika Schleier-Smith from Stanford University to give the prize lecture on “Choreographing Quantum Spin Dynamics with Light”. An extended Q&A session, where undergraduate physics students are especially encouraged to participate, will be organized immediately after the prize lecture.
The power of quantum information lies in its capacity to be non-local, encoded in correlations among entangled particles. Yet our ability to produce, understand, and exploit such correlations is hampered by the fact that the interactions between particles are ordinarily local. I will report on experiments in which we use light to engineer non-local interactions among cold atoms, with photons acting as messengers conveying information between them. We program the spin-spin couplings in an array of atomic ensembles by tailoring the frequency spectrum of an optical control field. We harness this programmability to access interaction graphs conducive to frustration and to explore quantum spin dynamics in exotic geometries and topologies. More broadly, advances in optical control of interactions open new opportunities in areas ranging from quantum technologies to fundamental physics. I will touch on implications for quantum-enhanced sensing, combinatorial optimization, and simulating quantum gravity.
Host: Yale Society of Physics Students