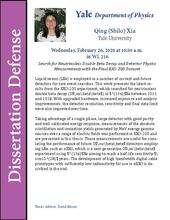 Liquid xenon (LXe) is employed in a number of current and future detectors for rare event searches. This work presents the latest results from the EXO-200 experiment, which searched for neutrinoless double beta decay (0$\nu\beta\beta$) in $^{136}$Xe between 2011 and 2018. With upgraded hardware, increased exposure and analysis improvements, the detector resolution, sensitivity and final data limit were also improved over time.
Taking advantage of a single-phase, large detector with good purity and well-calibrated energy response, measurements of the absolute scintillation and ionization yields generated by MeV energy gamma sources over a range of electric fields was performed in EXO-200 and are presented in this thesis. These measurements are useful for simulating the performance of future 0$\nu\beta\beta$ detectors employing LXe, such as nEXO, which is a next generation 0$\nu\beta\beta$ experiment using $^{136}$Xe aiming to reach a half-life sensitivity $\sim10^{28}$ years. The development of high-bandwidth digital cable prototypes with sufficiently low radioactivity for use in nEXO is described in the end.
Thesis Advisor: David C. Moore