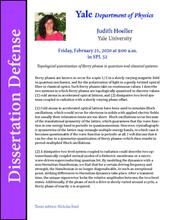 Berry phases are known to occur for a spin 1/2 in a slowly varying magnetic field in quantum mechanics, and for the polarization of light in a gently twisted optical fiber in classical optics. Such Berry phases take on continuous values. I describe two systems in which Berry phases are topologically quantized to discrete values: (1) cold atoms in accelerated optical lattices, and (2) dissipative two level systems coupled to radiation with a slowly varying phase offset.

(1) Cold atoms in accelerated optical lattices have been used to simulate Bloch oscillations, which would occur for electrons in solids with applied electric fields but usually their relaxation times are too short. Bloch oscillations occur because of the translational symmetry of the lattice, which guarantees that the wave function in one energy band is periodic in quasimomentum. However, crystallographic symmetries of the lattice may entangle multiple energy bands, in which case it becomes questionable if the wave function is periodic at all. I will discuss that it can be–due to a symmetry-quantization of Berry phases–which then results in period-multiplied Bloch oscillations.

(2) A dissipative two level system coupled to radiation could describe two optomechanically coupled normal modes of a dielectric membrane or a microwave-driven superconducting quantum bit. By modeling the dynamics with a non-Hermitian Hamiltonian, we find that for a certain driving frequency and strength, the Hamiltonian is no longer diagonalizable. At such an exceptional point, striking differences to Hermitian dynamics take place. After a transient time, the unique eigenvector locks the relative amplitudes between the two-level states. Additionally, if the phase of such a drive is slowly varied around a cycle, a Berry phase of exactly π is acquired.
Thesis Advisor: Nicholas Read