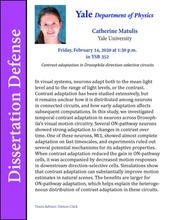 In visual systems, neurons adapt both to the mean light level and to the range of light levels, or the contrast. Contrast adaptation has been studied extensively, but it remains unclear how it is distributed among neurons in connected circuits, and how early adaptation affects subsequent computations. In this study, we investigated temporal contrast adaptation in neurons across Drosophila’s visual motion circuitry. Several ON-pathway neurons showed strong adaptation to changes in contrast over time. One of these neurons, Mi1, showed almost complete adaptation on fast timescales, and experiments ruled out several potential mechanisms for its adaptive properties. When contrast adaptation reduced the gain in ON-pathway cells, it was accompanied by decreased motion responses in downstream direction-selective cells. Simulations show that contrast adaptation can substantially improve motion estimates in natural scenes. The benefits are larger for ON-pathway adaptation, which helps explain the heterogeneous distribution of contrast adaptation in these circuits.
Thesis Advisor: Damon Clark (damon.clark@yale.edu)