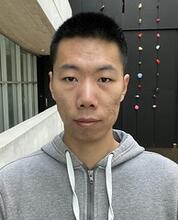 In this talk, I will discuss the modified quantum electrodynamics from a time-reversal-breaking Weyl semimetal coupled with a dynamical U(1) gauge (electromagnetic) field. I will emphasize that a key role is played by the chiral anomaly and the photons. Namely, the chiral anomaly makes the dispersion of the photons quite soft in a particular direction, say z-direction. Due to the soft photon, the fermion velocity in z-direction is logarithmically reduced under the renormalization group (RG) flow, together with the fine structure constant. Meanwhile, fermions acquire a finite lifetime from spontaneous emission of the soft photon, namely the Cherenkov radiation. Even though the fermion quasiparticles are eventually well-defined at very low energy due to the RG effect, over a wide intermediate energy window, the emergent Weyl semimetal behaves like a marginal Fermi liquid with inverse fermion lifetime proportional to the energy. Our result is more relevant for emergent Weyl semimetal, where the fermions and photons all emerge from strongly correlated lattice systems. The unconventional features of the emergent Weyl semimetal are potentially detectable through specific heat measurement.
Host: Meng Cheng (m.cheng@yale.edu)
Zoom Link: https://yale.zoom.us/j/93397425455