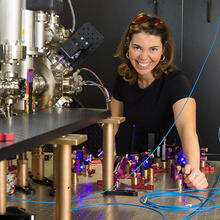 Title: Supersolidity in dipolar quantum gases: when atoms behave as crystal and superfluid at the same time
Abstract: In the quest for a greater understanding of many-body quantum systems, interactions are key, especially when they dominate over kinetic energy. Their form and strength crucially define the existing strongly correlated quantum phases of matter and dictate phenomena beyond the classical regime. Dipolar interactions, effective e.g. when atoms are strongly magnetic, are fundamentally distinct from the typical van der Waals interactions in neutral atoms.
Their orientation-dependence and non-locality enable the emergence of novel phases of matter, from ultra-dilute quantum droplets to supersolids and crystalline phases, in which gaseous atoms self-organize in space to produce ordered density wave with energy cost approaching zero.
In this talk, we aim to retrace the new opportunities and phenomena that have emerged from the use of quantum gases composed of the strongly magnetic erbium and dysprosium atoms from the perspective of the Innsbruck experiments.
Host: Nir Navon (nir.navon@yale.edu)
The Hanan Rosenthal Memorial Lecture was established in honor of physicist Hanan Rosenthal, a brilliant graduate student at Columbia University and instructor at Yale. This annual lecture in atomic physics, Rosenthal’s field, is given by a distinguished leader in the field. Originally, the lecture series alternated between Columbia and Yale, which were both significant in Hanan Rosenthal’s career; in recent years, the lecture has been held only at Yale University.