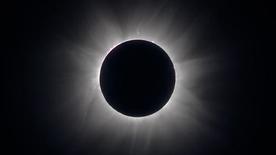 Yale Department of Astronomy faculty and students are turning their telescopes to the “Path of Totality” for the total solar eclipse on Aug. 21.

On that morning and afternoon — depending on the viewer’s location within the continental United States — the moon will crowd out the sun for several suspenseful moments. It is the first time in 99 years that a solar eclipse has made its way across the entire country, with a projected path that travels from Oregon to South Carolina.

“We all want to get the most out of this, either for research or for a once-in-a-lifetime sight,” said Allen Davis, a fourth-year graduate student in the Department of Astronomy.

Davis will be in Salem, Ore., for the eclipse, where he and several dozen other researchers, amateur astronomers, and enthusiasts will be setting up telescopes and cameras to record the event.

On the scientific front, eclipses present rare opportunities to study the solar corona, which is the outer layer of the sun’s atmosphere. The corona circles the sun and reaches millions of miles into space — and is best observed during a total solar eclipse.

“The corona is ‘sculpted’ by the solar magnetic field,” Davis explained. “We’re trying to capture the different parts of the corona to create a complete image.”

A better understanding of the corona may yield a variety of results, researchers say. For example, it could lead to the development of a system for better predicting sunspot activity that affects power grids and telecommunications systems on Earth. It also could give astronomers better insight into the interior workings of the sun.

“Ultimately, we want to know where and how the interior and exterior solar processes connect,” said Department of Astronomy professor and chair Sarbani Basu. “These coronal structures are in constant movement, and thanks to the eclipse, we’ll get a two-hour movie out of this.”

Basu will be on both coasts for eclipse-related events. She will deliver a lecture about the history of solar eclipses on Aug. 18 at the University of South Carolina, then fly to Oregon for a conference during the actual event.

In her lecture, Basu will note everything from eclipse-related superstitions to historical discoveries involving eclipses. The first photograph of an eclipse, for example, was taken in 1851; the understanding that the corona is a part of the Sun came in 1724. For centuries, the public feared eclipses, Basu said. “The Vikings used to blame eclipses on a pair of wolves that chased the sun and the moon,” she said.

Professor Robert Zinn has been chasing eclipses since he was a teenager. His father took him to rural Maine to view an eclipse in the early 1960s, and in 1970 Zinn studied an eclipse from Nantucket, when he was a Yale graduate student.

“It’s a spectacular thing to view. You can’t describe it with words adequately,” Zinn said. “At one point, just a tiny bit of the sun is uncovered. You see this beautiful, diamond ring effect. Then suddenly the eclipse is total and you see the corona stretching out. It’s an eerie feeling. The sun changes appearance completely.”

Zinn and several other faculty and staff will be in New Haven for the Aug. 21 solar eclipse — assisting at a public viewing event at Yale’s Leitner Family Observatory and Planetarium, 355 Prospect St.

The doors open at 1 p.m., with the eclipse (only a partial eclipse here in Connecticut) beginning at 1:25. There will be a limited number of eclipse glasses available on a first-come, first-served basis, as well as solar telescopes. The observatory also will show NASA’s live feed of the total solar eclipse.

And it is worth repeating, according to Davis, whose main area of research is exoplanets. In 2013, Davis went to Gabon in equatorial West Africa to view a total solar eclipse. At the time, he was a student at Williams College.

“The solar eclipse I saw in Gabon was the closest thing I’ve ever had to a religious experience,” Davis recalled. “There is this moment, this rush of anticipation. At the moment the moon fully covers the sun, I truly felt the scale of our solar system. It makes you feel very small.”

For more information about the Aug. 21 viewing event at the Leitner Family Observatory and Planetarium, visit: http://astronomy.yale.edu/event/public-event-partial-solar-eclipse-lfop